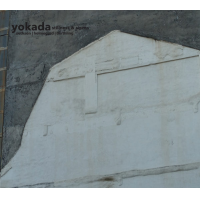 A new Stockholm-based piano trio, Yokada, has released their debut recording on Lisa Ullen's Disorder label. Though the sparse liner notes give no indication, it is a safe assumption that the trio's name comes from Andrew Hill's "Yokada Yokada" on Judgment! (Blue Note, 1964). This release—Stillness and Sirens—features one composition that is a tribute to Hill.

The members of the trio have previously worked together in partial combinations and their ability to put the recording portion of Stillness and Sirens together in two short days reflects a group at home with each other's creative process. Bassist Johan Berthling has performed with Mats Gustafsson, Paal Nilssen-Love, Martin Kuchen and many others. He's a member of the groups Fire! Orchestra and Angles 9. Drummer Johan Holmegard has also appeared on two Fire! Orchestra releases Exit and Enter (Rune Grammofon, 2013, 2014), has recorded with Jonas Kullhammar and appeared on dozens of regional recordings. Alexander Zethson is also the pianist for Angles 9 and has released an experimental solo piano/electronics recording Pole Of Inaccessibility (Thanatosis Produktion, 2016).

The seven original compositions typically have traditional elements at their core while covering a broad spectrum of improvisation. Yakoda does not, however, go too far out on the limb with lateral thinking. The opening "Portrait of a Portrait" touches on a plethora of influences from New Orleans to classical without losing its overarching theme, while "Cloudspotting" is pure, crystalline balladry. "Marbles" begins in a similar vein, slowly building energy and speed behind Zethson's exhilarating playing. The closing piece "Repeat, Dance, Forget" has similarly pliable properties to the opener; bop, swing and a bit of free playing all come together in the end.

Listeners familiar with these players from their work with the above-mentioned groups should expect something different with Stillness and Sirens. Discrete fragments and compositions reveal themselves in a suite-like program, flowing seamlessly throughout the collection. Harmonious and multilayered, each piece adds complexity to outwardly straightforward arrangements.