Sticky Fingers: The Life and Times of Jann Wenner and Rolling Stone Magazine

By DOUG COLLETTE
November 18, 2017
Sign in to view read count 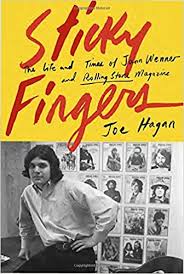 If Jann Wenner, the subject of Sticky Fingers, wasn't such a devoted fan of the The Rolling Stones (after whom he at least partially named the magazine he founded), Joe Hagan might've equally aptly titled his biography of the man after Kris Kristofferson's song "The Pilgrim," two lines of which appear to capture the author's conflicted view(s) as documented in The Life and Times of Jann Wenner and Rolling Stone Magazine: "He's a walking contradiction...Partly truth and partly fiction.."

But this writer, who's covered politicians, statesmen and media figures of our time, and was actually asked by Wenner to compose the book, appears to have fallen prey to the same contradictory mix of seduction and repulsion that afflicted so many of the family members, celebrities, creative artists and business partners with whom Wenner developed relationships. Certainly there's no lack of attention to detail in these five-hundred-plus pages: the plethora of sourcing references and annotations suggest a defensive Hagan feared exactly the kind of reprisal(s) that arose upon publication of his tome.

But the flashes of insight here are as few and far between as the elements of continuity in this story that sew Jann Wenner's evolution (or lack thereof) to the progression (regression?) of culture beginning in 1967 when he established Rolling Stone Magazine in San Francisco. A righteous devotion to rock and roll as that very thread frayed in part due to the editor/publisher's own narrow-mindedness, a similarly constricted perspective that caused him to miss the future significance of MTV and the internet in their respective nascent stages.

Hagan certainly goes into more than enough detail to support a hypothesis or two. In fact, his prologue lays out the outline of Sticky Fingers with such clarity, it almost sounds like his submission letter to the publisher. Compare that economical entry with the granular sourcing he documents and the timeline he pursues: the author doesn't come right out and declare inevitable the reporting debacle on campus rape that undermined Rolling Stone Magazine's elevated journalistic integrity, but he could have given the litany of financial close calls Jann Wenner encounters (many due to his own appetite for excess.

ADVERTISEMENT
And whether those egregious oversights stem from one psychological source or a combination of factors remains vague throughout. Overweening ego, a voracious appetite for drugs and alcohol, near-terminal materialism or personal issues that appear to remain unresolved to this day, ultimately turn into red herrings, camouflaging what was bad judgment pure and simple. Joe Hagan remains so distanced from his subject and the timeline he pursues, he doesn't imply his own point of view, which is admirable in its objectivity, but only up to a point.

The coy means by which he handles Wenner's sexual preferences throughout The Life and Times carries a thinly disguised mean-spirited attitude: he inserts mention of the topic often enough later in the book, just prior to recounting Jann's gay marriage, that it almost but not quite becomes a non-sequitur in the context of the man's other often-self-induced travails. Similarly, there's a vaguely unsympathetic portrait drawn of Wenner's wife Jane that bespeaks a contrived slant for this book and it's not clear if Hagan (or his editors) deliberately adopted that angle or if it arose naturally in the course of researching and prepping for publication.

Certainly, there's as much to be learned from reading this as Fifty Years of Rolling Stone: The Music, Politics and People that Shaped Our Culture (Harry N. Abrams, 2017). The magazine's cozy collaborations with record companies for advertising may not be as revelatory as the depiction of Jann Wenner's epiphanies as they arose from the murder of John Lennon or the tragedy of 9/11, but those themes certainly shed light on why in composing the aforementioned coffee-table title, its own author makes only scant mention, even in any self-congratulatory way, of the struggles involved in keeping his vision alive for a half-decade, in both the practical and conceptual sense.

The conflicts of tone within Joe Hagan's story are not directly proportional to each other, but clearly reflective of the ambiguities in the title (and subtitle too). His alternately compelling account of, for example, the rise and fall of gonzo journalist Hunter Thompson, hardly seems like the work of the same writer who, in such overly dry dispassionate fashion, lays out the various comings and goings of writers, photographers and financial advisers in a sequence of events whereby Rolling Stone moved to New York City and more deeply than ever into the mainstream (as also reflected in some of its founder's other eclectic endeavors like Outside and Us Weekly).

As a result, this title may not be a must-read for either the culturally curious or the nostalgic fan, in part, because there will certainly be another biography of Jann Wenner (the first actually was still-born), but because Joe Hagan's project, not to mention the author himself, turned out to be as rife with ambivalence(s) as his subject. Which is a distinction...of sorts.