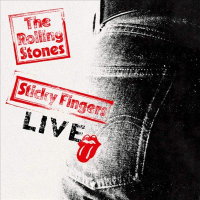 Orbiting somewhere close to the 45th anniversary of the release of Sticky Fingers (Rolling Stones, 1971) the "Greatest Rock 'n' Roll Band in the World" opened their 2015 "Zip Code" tour on May 20th at Los Angele's intimate 1,300 seat Fonda Theater where, in the middle of a standard Stones show, the band played the entire Sticky Fingers for their first time. It has recently become fashionable for bands to perform in their entirety recordings deemed seminal by the passage of time. Examples of bands playing their own music in this manner are Pink Floyd's performance of "Dark Side of the Moon" on Pulse (Columbia, 1995) and the Allman Brothers Band's 40th Anniversary performance of At Fillmore East at the Beacon Theater in March 2011.

Allied examples are of bands other than the original performing classic rock albums, include Phish's "Musical Costume" presenting Little Feat's monumental Waiting for Columbus (Warner Bros., 1978) or Gov't Mule's splendid take on Joe Cocker's Mad Dogs and Englishmen (A&M, 1970). For the Baby Boomer, this is nothing but good clean fun.

So, what of the Glimmer Twins, in twilight, revisiting well-worn and rarely traveled repertoire in anno domini 2015? It is a matter of context. First the universal truths. Stick Fingers and her sister recording Exile on Main Street (Rolling Stones, 1972) were recorded during the period of the heroin inertia of the late '60s and early '70s. The band was nominally in their late 20s and at their creative peak. Hearing "Brown Sugar" in the summer of 1971 was about as exciting as things got musically. The entire recording was one of shocking depravity and decadence in the smoldering mores of the post-"Summer of Love," only to be eclipsed a year later by the definitive Rolling Stones statement, Exile. The archived performances surrounding Sticky Fingers release, specifically, Rolling Stones: From The Vault: The Marquee Club Live In 1971 (2015) (Eagle Rock Entertainment, 2015) and the Live at the Roadhouse sides from 1971 (included on Sticky Fingers Super Deluxe Box Set Universal Products, 2015) reveal a ragged and hungry band making their mark in a post-Beatles world, while never looking back.

The second universal truth is the Rolling Stones turned more businessmen than musicians after the release of Tattoo You (Rolling Stones, 1980) an existential evolution in all creative entropy. This is most evident on the present Sticky Fingers Live. This is reflected in Jagger's decision to change the performance order from that of the album. His reasoning undoubtedly being that Sticky Fingers had too many slow pieces to sustain the momentum of a proper rock concert. As sequenced the entire show, which included non Sticky pieces fore and aft is professionally conceived, but not artistically so. These are mere quibbles...it's the Rolling Stones, afterall.

The third and final universal truth is the band and the music is nearly 50 years older. This creates a space-time disconnect. Overall, the performances are slightly stilted and a bit stiff, not that this matters. That we can hear rarely performed pieces like "Sway," "Sister Morphine," Can You Hear me Knocking," "I've Got the Blues," and "Moonlight Mile" make this recording worthwhile. It won't be for everyone except those "of a certain age."