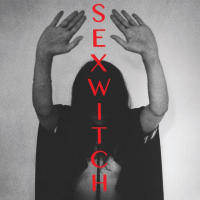 With Natasha Khan, the singer of Bat for Lashes and now Sexwitch, you can never be quite sure what is coming next. On the one hand her trademark experimental pop has progressively reached out to a more mainstream audience in the years between 2006's Fur and Gold and 2012s The Haunted Man, yet there remains the impression that something more radical is being reined in, being held in reserve. Perhaps Khan feels that we, her audience, couldn't cope with the unfiltered contents of her mind or, even, lacks confidence in her creativity—a charge that if it ever had any currency has emphatically been refuted by this extraordinary side project.

This album, a collaboration with producer Dan Carey and several members of Psych-rock indie band Toy, is a collection of obscure psychedelic covers predominantly from Iran, Morocco and Thailand. Only album closer "War in Peace" was originally recorded in English—by Skip Spence once of Jefferson Airplane and Moby Grape. The songs were discovered as part of a record shopping trip Khan and Carey undertook, choosing promising tracks and then commissioning multiple translations of the lyrics from friends. Khan then edited the various interpretations into the new versions which have that slightly askew or unusual turn of phrase that is common in translated lyrics or those written in the author's second language. Abba's Esperanto pop of the late 1970s is a good example of how this can work and here the effect adds to the feel of displacement from the ritualised rhythmic chants that make up many of the collection's finest moments. Take the chant of "He addicted me and I addicted him" on album opener "Ha Howa Ha Howa"—the meaning is clear but the odd way of expressing it becomes more and more unsettling with the levels of repetition.

It's the performances that make this unusual brew work however—Khan is utterly convincing, pitching her vocal somewhere between the fractured beauty of Dead Can Dance's Lisa Gerrard and the 'mad eyed screamer' that was Siouxsie Sioux in Banshees side project the Creatures. Best track is "Kassidat El Hakka" its eerie chant of "When I die, I'll go back to where I was" over an insistent eastern inspired guitar line, culminating in the lyric of taking responsibility for ones actions of "if you're fleeing and you do not know, it will linger in your soul" which Khan imbues with just the right amount of drama. Instrumentally too all is on point—the modern beats meshing near perfectly with Toy's psychedelic grooves adding power to the atmosphere. Apparently the band learnt the songs in just one day, recording the final versions on another day mostly in the energetic, driving, single takes captured here. The nearest touchstone is that the instrumentation captures something of the atmosphere of Goat's albums World Music and Commune but with an edginess in the vocal that puts this on a higher level to them.

It all feels a bit like a Native American ayahuasca experience that Khan once spoke of putting herself through..." you descend into the pits of any shadow-side of yourself, anything you're trying to hide from yourself, and it's... terrifying. All of your stuff, you have to face it, and you're sick as well, so it's quite a physical purging as well as a mental one." So potent is the music here that its tempting to read this side project as a purging of creative tocsins, an exorcism of the restrictions of her regular band identity. This may all turn out to be fanciful speculation—the next Bat for Lashes album is apparently already written if not recorded. But at the very least Sexwitch is an entertaining, diverting creative left turn that has made for a very fine album -successfully bridging the chasm between the experimental and the accessible. As such it is at least the equal of Two Suns, the second and best Bat for Lashes album, and with a few months to settle in our brains might yet surpass it. Highly recommended.