By Doug Collette
October 17, 2015
Sign in to view read count
It's been said before but it's worth saying again: if the coincidental Grateful Dead archive releases on Real Gone Music and Rhino Records are meant to complement each or not, they end up doing so. Significant changes in the band's personnel took place in the fifteen months between the April 22, 1978 show captured on Dave's Picks Volume 15 and and Dick's Pick's Volume Five comprised of 12/26/79. it'd be just another instance of innovative marketing arising from the grateful dead zeitgeist If these two labels collaborate in a way their respective product not only does justice to this band's legacy but illuminates its details. That said, it's not absolutely necessary to partake of both to derive great pleasure and enlightenment from these titles. 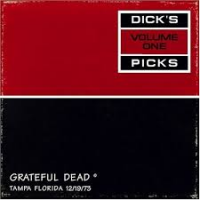 The former performance constitutes an excerpt from one of the last tours with Keith Godchaux and spouse Donna: the pair would leave the Dead in a mutual agreement in February of the same year and, within two months, keyboardist/vocalist/songwriter Brent Mydland would be recruited from rhythm guitarist/vocalist Bob We're band in turn re-configuring the group's chemistry in the way he bolstered their all versatility as a singer, player and writer.

Little wonder then that, right from the start on "Cold Rain and Snow," the group sounds so loose and confident of themselves on Dick's Volume 5 playing in Oakland the day after Christmas on the threshold of the Eighties: the group no longer had to exert effort to keep itself tight as the Godchaux' personal dynamic intruded on the stage camaraderie. Quite the contrary, the Dead could justifiably rely on its innate sense of direction and shared responsibility to get the music flowing then to a great degree, follow it as much as they pushed it. The segue from two of their most famous so-called 'cowboy' songs,'"Me and My Uncle" and "Big River," illustrates the intrinsic sense of purpose and a near-telepathic means of communication active in the ensemble musicianship.

Yet the Dead are at their best here, not content in small steps of improvisation, but great leaps of same as occur from disc two to disc three: they proceed from uninterrupted from "Uncle John's Band" to "Estimated Prophet" into an untitled jam that in turn takes them from "He'd Gone" into "The Other One," "Drums" and beyond to the rousing home stretch, an encore of Chuck Berry's "Johnny B. Goode," then a return(!) to "Uncle John's Band." It's one of the clearest depictions on record of the savvy intuition the band enacted to weave together, via extended moments of spontaneity, material from different phases of their career into a seamless whole. 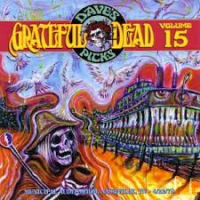 The same is generally true of Dave's Picks Volume 15 the crucial distinction lying in the fact, the band relies on the material as guideposts for their playing rather than the other way around. As is often the case, the interaction of drummers Bill Kreutzmann and Mickey Hart is a barometer of the Dead's playing and the effort they're expending to move the band along is clear by the time the septet moves from "Bertha" to "Good Lovin'" and on to "Tennessee Jed:" the lilt in the tune itself is there but just barely (an aspect of the performance more in evidence with Betty Cantor-Jackson's recording at high-volume).

In an equally telling progression, the band slips more assuredly into the performance's more exploratory passages, via the segue from "Estimate Prophet" to "Eyes of the World," after which the pair of percussionists create a particularly mellifluous "Rhythm Devils." Representing something of an unusual linkage, the band's collective action works as the unified likes of "Wharf Rat" to "Sugar Magnolia" and "One More Saturday Night" moves and rouses in such a palpable way, it illustrates the evolution depicted in David Lemieux' abbreviated essay inside the colorful booklet enclosed in Dave's 15 (a far cry from the deliberately generic graphics of early issues of Dick's Picks as depicted).

The chief archivist rightly focuses in on a comparison of the Grateful Dead stage mindset as it evolved from the disciplined approach of 1977 into the more loose-limbed motion of following year. offering just the kind of keenly-insightful, discerning perspective that distinguishes such modern-day projects as he oversees.