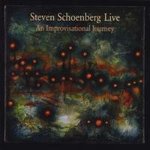 Like the face of Helen launching a thousand ships, for better or worse, Keith Jarrett's 1975 Koln Concert (ECM) inspired a like number of improvisational piano recitals (half of which were ultimately Jarrett's own) and the entire genre of "New Age" solo piano music. This spontaneous creativity is, at best an inspiration, and at worst, a bore.

It is emphasized in jazz that musicians must be accomplished on their instruments and able to fully integrate all they know spontaneously. And that is with, typically at least, a starting point. What pianist and spontaneous composer Steven Schoenberg does in his own "interactive" An Improvisational Journey is start a piece with an eye blink, a deep breath, and a long, integral, creative exhalation with a beginning, a middle and an end.

Schoenberg summons an impressive knowledge of American music to produce these nine improvisations, each orbiting a different idea. "Day and Night" is a rumination reminiscent of George Winston's grand prairie pieces where all musical grammar is simple and straightforward. Not one dissonant turn is left without resolution. "After Dark" is a blues fantasy that travels from a smoky Chicago nightclub to a humid Arkansas African Methodist Episcopal Church sanctuary to a nervous tightrope completed with a killer left hand.

"In the Darkness" is recorded as titled, in the dark. Here Schoenberg strays well beyond the fixed and durable phrasing of the American Songbook, achieving something like a hip John Fields nocturne. "January Blues" skirts the old 12 bars without ever fully embracing them. There is a whole lot of church here, as well as boogie-woogie. "Notes" is cobbled together from a note request from the audience. Schoenberg does his best Boulez on a brief asymmetric motif.

Day and Night; After Dark; Purple Sky; In the Darkness; The January Blues; Notes; Father and Son; A Time for Peace; American Encore.