The trio is masterful, not just playing the music, but making each note, chord, and phrase come alive. 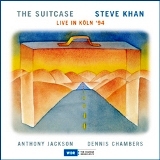 In the annals of rediscovered live jazz recordings, The Suitcase, by guitarist Steve Khan, ranks among the best in recent memory. Nothing is quite like the experience of live jazz, but this 1994 performance at the Stadtgarten Club in Koln, Germany, is the next best thing to having been there.

The format is simple; as Khan modestly states, "It is an evening of trio music and trio music making." But there's nothing simple about the tremendous display of musicianship, energy and spontaneity that Khan, bassist Anthony Jackson and drummer Dennis Chambers brought to the listeners, then and now, with this double CD set of over 150 minutes of music.

Khan's eminent and identifiable guitar work has spanned many years, authenticated on a who's who list which includes saxophonist Michael Brecker, pop icons Steely Dan and Joe Zawinul's Weather Update. Yet his own music as a leader is what sets Khan apart; works that include the eclectic "Eyewitness" recordings of the 1980s and his celebrated return with The Green Field (Tone Center, 2005) and Borrowed Time (Tone Center, 2007).

As usual, the guitarist surrounded himself with excellent players. Jackson proves that he is one of jazz's unique electric bassists, whose playing can rival the late Jaco Pastorius in terms of ingenuity. The creator of the Contrabass guitar (a specially designed six string electric bass), Jackson plays his axe like a standard guitar with resonance, lyricism and stylistic imprints. Chambers has been the drummer of choice for numerous artists including bassist Stanley Clarke and guitarists Mike Stern and Carlos Santana. Whether it's straight-ahead, fusion, or "Tearing the roof off the Muther" with George Clinton's Parliament/Funkadelic, he is a propulsive and versatile player.

The Suitcase features selections from Khan's earlier works spanning seven recordings from Eyewitness (Antilles, 1981) to Crossings (Verve, 1994). "Where's Mumphrey?" signals Khan's "eclecticity," music that encompasses his travels from the barrios of Caracas, Venezuela and Medellin, Colombia to the busy streets of his home in New York City. The very hip "What I'm Said" glides as Khan delivers the chorded melody, Jackson adds the bottom, and Chambers the pulse. Khan surprises on that tune, with a solo that's first clean and then given even more attitude with distortion.

Whether swinging lively on Khan's "Blue Zone 41" or articulating the workings of trumpeter Lee Morgan's ballad "Melancholee," the trio is masterful, not just playing the music, but making each note, chord, and phrase come alive. The many highlights on the first disc include Jackson's brilliant and otherworldly bass solo and performance on the title track (played in 6/4 with cryptic middle Eastern references) and Chambers' extended, double bass pedaled solo on "Blades" sounding as if two drummers are playing simultaneously.

Disc two is just as vitalized, beginning with the ultra stylish "Guy Lafleur" that is both atmospheric and melodious. Khan moves through intricate chordal changes, while Chambers delivers cow-belled accents and stimulating traps. Khan's spidery solo is then tinged with a nice effect (simple upper-octave supplied by a harmonizer), while Jackson's six-string is just as inventive, employing a variety of timbres. The tune ends with a mesmerizing pattern that lingers in the memory long after it's finished.

The trio's music is vivid. On "Eyewitness" the mood is dreamy, yet accentuated by the details of each instrument—the tap of a cymbal, a staccato bass run, tricky guitar intonations. Khan and Jackson have one of most interesting connections in music, giving and taking, tension and release, and always in flux. Their guitars engage in an elaborate dance on the beautiful "Dedicated To You," a song written by Khan's late father, songwriter Sammy Cahn. Or their incendiary exchanges on saxophonist Joe Henderson's "Caribbean Fire Dance," where Chambers delivers another awe-inspiring drum solo.

From start to finish The Suitcase is outstanding, with all the distinguishing elements of a live concert present—expectancy and surprise, improvisation and composition, performed by consummate musicians who gave it their all. The turn of events of how this recording materialized is a fascinating story in itself. Here's hoping that we get some more surprises of this caliber, especially from guitarist Steve Khan.