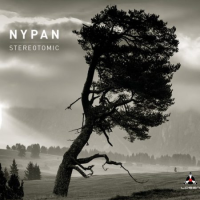 You have to give people a chance to miss you sometimes. Oyvind Nypan certainly seems to understand the idea of spacing visits apart in order to have something to bring back to the table each time. His second Losen Records outing took four years to follow on from Republique (Losen, 2013), and the entire backing cast is different, but there's something to be said for the pleasure of catching up (possibly for the first time). They may not have the played-in togetherness of a longtime ensemble, but the guitarist's self-named group wheels and bounces through his charts with enough chemistry to make this date feel anything but stilted.

Stereotomic is named for the practice of cutting stone to precise dimensions. It implies something slow and painstaking, which makes an interestingly misleading title for a session that was rehearsed and recorded in two days. Nonetheless, the album still evokes the feeling of fitting things into their proper places, even without excessive calculation. Nypan's selections here (all self-penned) are sketched out with recognizable melodic heads and built with a good amount of space for the other players to add their shadings. His guitar is always superbly toned, ready to gently ring out or glide through smooth lines like a colorful fish in motion.

Past associate Bernt Moen gets a share of standout moments at the piano as well, particularly his tricky scattershot solos through the classic-cinema-like "Don't Mind if I Do" or "The Resignated Driver," which come out much more accessible than their sophisticated chordings suggest. Those playful performances are balanced out with smoother moments like "Piece for Peace" and the comforting lullaby/requiem "Paris," the happy old-time jitterbugging of the finale, or the atonal Keith Tippett-ish free blows at the center of "The Big Rumble Tumble." That last is a jarring and perhaps unnecessary contrast to Stereotomic's range of moods, but for the most part the pieces sound coherent enough to fit as building blocks in the same artful structure. Let's hope we don't have to wait several more years to hear from Nypan again—though if we do, we know he'll be coming back with a lot more to share.

Heavy Hangs the Head; Don't Mind if I Do; Piece for Peace; Resignated Driver; Just for the Record; The Big Rumble Tumble; Paris; This Old Thing.