By John Sharpe
January 4, 2021
Sign in to view read count
When everything shut down in March 2020 due to the Covid pandemic, New York City native tenor saxophonist Stephen Gauci initiated what he thought would be a set of five duet recordings in a refusal to be cowed by the lack of performance opportunities. In fact the collection has run to some 19 entries over that summer, with the four releases here, each of just over 30-minutes duration, being just among the first.

For this initial batch of download only albums, Gauci enlists a string of A-listers from the avant jazz scene, documenting encounters with drummer Gerald Cleaver, pianist Matthew Shipp, bassist Michael Bisio and multi-instrumentalist Daniel Carter. Raw and engaging, each of these spontaneous duets is special, and Gauci's contributions are nothing short of revelatory.

While already a strikingly original voice with a sizeable discography, Gauci's profile has risen meteorically since 2017 when he began his presentation of the ongoing Bushwick Improvisers concert Series. In 2019 he launched his own label to document both his own and other artists performances at Bushwick, and in subsequent studio situations, with high points including Studio Sessions Vol. 1 (2019) with pianist Cooper-Moore and Live At The Bushwick Series (2020) with the keyboards of Eli Wallace and drums of Kevin Shea.

Gauci has extended an idiosyncratic conception in which he takes a painterly attitude to sound placement and avoids conventional phrasing by accentuating overtone manipulation and multiphonics. He often teeters between a ululating altissimo and harmonic laden blurts, before embarking into a densely plotted, muttering middle register. On occasion he is almost lyrical, once even evoking reveille sonorities. But throughout all four sessions Gauci varies his approach, takes stock of his surroundings. The results are inspired. 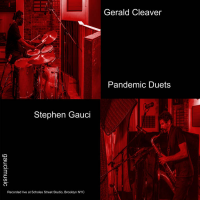 Captured near the beginning of July at Scholes Street Studio in Williamsburg, the location for all these meetings, Cleaver and Gauci push each other all the way on three uncharted inventions. Cleaver marshals multiple rhythmic impulses in a multi-layered carpet which enables him to maintain a rolling momentum, even while offering comment or accompaniment to Gauci. The drummer manages precisely articulated details even at a roiling boil. He demarcates each of the three cuts through varying his emphasis, whether chattering, tumbling, pulsing, moderating timbre, or attenuating cymbal resonance.

A process of synchronization seems underway whereby Cleaver's accents mark the angles of Gauci's phrases, and the saxophonist's phrases align themselves with Cleaver's cadence. Several times during the conversational "#1," Cleaver echoes Gauci's motifs in a string of pleasing confluences. Another memorable episode stems from a sequence of yelping distortions juxtaposed against Cleaver's low toms and kickdrum dominated stream. By way of contrast, on "#2," a cut characterized by long pauses, Cleaver adopts a lighter, spacious cymbal-washed gambit, matched by Gauci's querulous squeak and intermittent gruff blasts. 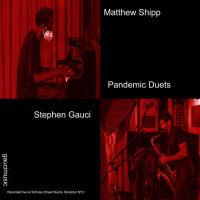 In August, Gauci teamed up with Shipp for a marvelous twosome, tackled largely in harness. Both men are at the top of their respective games. Shipp is thoroughly at home in the format, having waxed numerous discs with Brazilian saxophonist Ivo Perelman. So this set with another player with a predilection for the upper partials offers a fascinating counterweight. Shipp seems inclined to revisit the thunderous, but controlled, bottom end pounding, which was a characteristic part of his early career armory, though that of course is balanced by stately progressions, scuttling bursts and tender reflection, particularly manifest in the initial number, when Gauci blows especially delicately.

Some of the best moments arise when Shipp pummels the keys and Gauci either scales the heights in opposition, or conversely excavates the harshly sculpted deep. Although clearly in synch, it's not the more overt connection Shipp enjoys with Perelman. Rather, there's a sense of seeking out what might be the most appropriate or challenging response in any given situation. Whether the intent or not, the listener can easily project feelings of anger, frustration and intense emotion onto the conjunction of the pianist's insistent depth charges and Gauci's elevated cries. 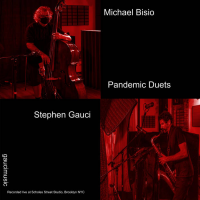 As the person who first hipped him to free playing, Bisio has been a seminal influence on Gauci. Bisio appeared on the reedman's first dates and the bassist returned the compliment by including Gauci in his acclaimed quartet, heard on a variety of albums on the CIMP and Not Two labels in the mid-2000s. Perhaps that prior bond explains why this is the outstanding recital of this first tranche, with Gauci seemingly harking back to a more traditional persona and free-bop sensibility while Bisio's nimble pizzicato grounds the saxophonist's animated flights in a non-stop passionately productive communion. Gauci uncorks a husky skirl, whickering squeals, and urgent hoots amid cascades of expressive colors and shapes, often with a visceral impact.

Bisio remains ever alert to Gauci's trajectory, sometimes briefly replicating the tenor saxophonist's syntax, at other times tracing an elaborate counterpoint. The bassist's meticulous attention to his sound is well recorded, evidenced by the incisive unaccompanied features embellished with delicious miniature slurs and fluttering tremolos. While the opening "#1" displays each man's wares as expected, from the conflation of Bisio's arco harmonics and Gauci's measured split tones on "#2," both men are increasingly moved by the spirit in a wonderful outpouring. 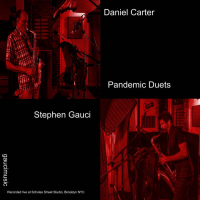 It's not every day that Gauci pairs up with another horn player. In fact this rendezvous with downtown veteran Daniel Carter is the first he's issued on his own imprint. While it's true to say that Carter brings out another side of Gauci, the reverse is also true, with the older man more abstract, likewise alternating between a gnarly mid range and a liquid squeal on "#1" in a measured exchange. Indeed if it wasn't for the stereo separation it could be hard to differentiate between them, especially when combining in filigree falsetto. They hit on some lovely consonances which lead to ear catching oscillations when one shifts to an adjacent pitch.

When Carter does inch into what has become his customary domain of slightly melancholy blue-tinged expression, Gauci goes there too. On trumpet Carter revels in a airy and gracious duet with Gauci's tenor. Gauci also broadens his palette, uncasing his flute and clarinet, to partake in a breathy, cool interchange on flute with the similarly equipped Carter, and then finishing in a two-clarinet tandem of a chamber ambience, spiked by enigmatic squalling excursions. Consequently this nine-track outing possesses a singular, more understated, character to the other duets, as if the rage has abated and there is something more akin to acceptance in the air. However, with another 15 installments to go, that's seems unlikely to remain the case for long.