By Troy Collins
September 24, 2012
Sign in to view read count 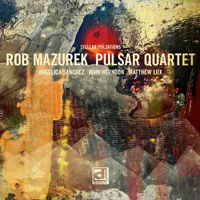 Originally schooled in the foundations of hard bop, cornetist Rob Mazurek, quickly surpassed the form's conventional limitations; his multihued electro-acoustic work over the past two decades has subsequently drawn inspiration from numerous genres besides jazz. Mazurek's unfettered creativity and stalwart leadership skills have thereby cemented his reputation as a key figure in the Chicago scene—primarily as organizer of the venerable Chicago Underground Duo and several other innovative ensembles including Exploding Star Orchestra, Sao Paulo Underground and Rob Mazurek's Starlicker.

Stellar Pulsations, the studio debut of Mazurek's Pulsar Quartet, eschews his usual penchant for computerized processing and electronic loops, offering a stirring avant-garde reinterpretation of the cornetist's formative neo-traditional endeavors—an aspect paralleled by Sound Is (Delmark, 2009), the premier of his self-titled quintet. Beyond its aesthetic concordance with the five-piece unit, the quartet features similar talent; electric bass guitarist Matthew Lux and drummer John Herndon are charter members of both lineups, while New York-based pianist Angelica Sanchez makes her first appearance alongside Mazurek outside of Exploding Star Orchestra, whose personnel also includes Lux and Herndon.

Subtly evoking the cosmic spirituality of the New Thing, Pulsar Quartet modernizes the fervent expressionism of post-war modality with a scintillating electro-acoustic palette, balancing episodes of ecstatic rapture with introspective balladry—reinforced by harmonious melodies. It is the latter aspect that proves most noteworthy; although Mazurek is widely renowned for his imaginative writing and bold improvising, this particular album spotlights his talents as a first-rate tunesmith and lyrical interpreter.

Enriched by Mazurek's memorable themes, the session veers between tonal extremes, gracefully pirouetting from the anthem-like fanfare "Primitive Jupiter" and the angular swinger "Spiral Mercury" to the luminous ballad "Magic Saturn" and the plangent meditation "Folk Song Neptune." The blustery extrapolations of "Spiritual Mars" and "Twister Uranus" regale with tempestuous abandon, while the hypnotic Iberian groove of "Spanish Venus" conjures melodious chiaroscuro that simultaneously evokes both light and shadow.

Bolstered by some of Mazurek's most mature playing on record, Stellar Pulsations is a masterful update of the jazz tradition and a notable highlight in an eclectic, albeit highly accomplished discography.