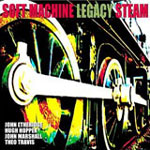 The band name says it all. Three members of this quartet worked at different times in the original Soft Machine whilst the fourth has assumed the mantle once taken by the late and lamented musician, Elton Dean. They've come up with a program of music that pulls off the not inconsiderable feat of acknowledging the legacy at the same time as it forges ahead in new and distinct ways. The world would be a far more interesting place if more musicians operated on a similar level.

Guitarist John Etheridge's solo on the opening "Footloose" is a case in point. There's a sense of economy in his work which has not been overt in the past and which serves notice of the new dynamic the group adheres to, and the balance between reflection and heat on this one could serve as strong indication of precisely where they're at.

The music overall is so much more than faceless fusion, and the depth of approach that the quartet takes is arguably best exemplified on "So English," a group composition fashioned perhaps in the moment and far more of an exercise in deft soundscaping than it is a display a full-on but ultimately empty virtuosity. In this respect at least it could amount to a major subverting of the rules, and that kind of thing is always welcome.

Bassist Hugh Hopper does of course have something of a track record in working with tapes and generally augmenting what might glibly be called the conventional ways of making music, and on this disc he's joined by saxophonist and flautist Theo Travis in the use of loops as a means for augmenting the group's sound. These sources are handled deftly and effectively throughout, but it's on Travis' "The Last Day" that their use is most overt, and John Marshall on drums shows just how responsive he is as an improviser in a context that signals perhaps the shape of things to come from this band, which is just as it should be.

There is a look back however, and it comes in the form of a reading of Mike Ratledge's "Chloe & The Pirates a piece first aired on record thirty odd years ago on Soft Machine's album—Six (Rewind, 1973). Travis' soprano sax is alert to the slightly melancholic contours of the melody and the whole band put out their grasp of light and shade in a way that many can only dream of; renewal, then, is also a thematic element of this music.

A project such as this could have easily descended into an exercise in repertory, but as it is this is a document of ongoing creativity. The legacy as such is renewed, built upon, and the results are nothing short of a joy.