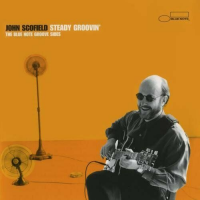 By releasing Steady Groovin' , Blue Note is sending out a reminder.

Steady Groovin' contains no new tracks. What it does contain, though, are 11 of John Scofield's funk-based compositions from his 6 Blue Note CD's, two of which are based solely on his recently recognized mastery of the jazz jam groove: Groove Elation and Hand Jive.

That John Scofield has been creating a consistent style for the decade he has been recording for Blue Note—and even before that. Rather than arriving at his unmistakable approach through years of development, it seems that jazz enthusiasts in large numbers have caught up with the inimitable Scofield style that has been there all along.

More than that, Steady Groovin' musically implies that the origins of jazz funk preceded Scofield's work. Eddie Harris joins Scofield on "Do Like Eddie," and his likewise instantly identifiable style meshes with Scofield's instantly. Scofield doesn't join Harris by adapting to his groove as much as by taking the cue and carrying it to another level. Slyly referring to "Freedom Jazz Dance" in his solo, Scofield nods to the past as his accessibility helps to create new audiences for jazz in the future.

The selection of tracks for Steady Groovin' judiciously acknowledges each of Scofield's Blue Note CD's and extracts similarities of groove from each. Also, that selection varies Scofield's repertoire enough to feature his steely guitar sound in a number of upbeat moods, from the celebratory street march beat of "Carlos" to his ability to recall the deep South blues of "Twang."

Even though Scofield is accompanied by forceful musicians in their own right, he remains the calm center of the tunes, radiating rhythm and feel. On "Fat Lip," the irrepressible Jack DeJohnette is let loose to solo with an energy channeled toward the heightening of the tune's beat. Or Joe Lovano develops the melody of "Chariots" into a free and a rocking statement than the initial chorus would imply.

Steady Groovin' reminds us of the fact that Scofield is in a class of his own as it primes us for his next CD.