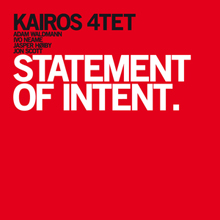 Two years on from its debut, Kairos Moment (Kairos, 2009), Kairos 4tet's Statement Of Intent categorically proves that the critical applause granted to its first album was well-deserved. Statement Of Intent is full of energy, inventiveness and melody, demonstrating a maturing musical sensibility, and placing the band fairly and squarely in the top flight of the UK jazz scene.

Saxophonist/composer Adam Waldmann formed the band in 2008, soon after graduating from London's Trinity College of Music. Waldmann's writing, and his bands occasionally idiosyncratic but never self-indulgent approach to playing make for a vastly entertaining record. Pianist Ivo Neame, no mean saxophonist himself, has replaced Rob Barron, and delivers some delightful solos as well as fitting seamlessly alongside drummer Jon Scott and bassist Jasper Høiby in the outstanding rhythm section. Neame and Høiby are also two-thirds of Phronesis, another highly regarded UK-based band, so their partnership is based on an already fruitful relationship.

Most of these tunes are characterized by a quiet, reflective, beauty. "Simpler Times" has a gently rolling rhythm, over which Waldmann adds his warm, soft, tenor saxophone, and closes with Neame's short but tender piano solo. The title track's melody is a little wilder, but still immediately accessible, with a hint of Middle Eastern influence in Waldmann's saxophone part and Høiby's positive and confident solo. "Box Set Anti-Hero" is skittish and bouncy, with Scott's lightly darting drums and Høiby's pumping bass moving the tune along, "Me and You, 100o" mixes rhythmic variation with funky bass and drums.

"Maybe Next Year" and "The Calling" feature vocalist Emilia Mårtensson, who sang on one tune on Kairos Moment. Doubling up her contribution seems eminently sensible, for the young Swedish singer is blessed with a light, romantic and emotive voice that works perfectly with Waldmann's melodies. Neame's solo on "Maybe Next Year" is the perfect complement to Mårtensson's fragile vocal.

Statement of Intent; Maybe Next Year; Hicks; Philosophy of Futility; Box Set Anti-Hero; Simpler Times; Me and You, 100o; The Calling.