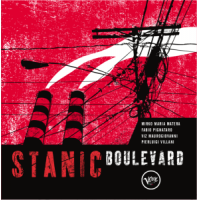 Stanic Boulevard from drummer Pierluigi Villani and his Ensemble is a very distinctive album which offers highly-textured contemporized original compositions, each from a group member and each of which is performed with superb musicianship and exquisite taste. It is jazz collaboration at its best.

"More or Less," the driving opener, delivers a rock-blueish melody reminiscent of Horace Silver. It speaks energetic hard bop, soulfully written and very well-performed. Pianist Miko Maria Matera, guitarist Fabio Pignataro, and Villani offer fine solos. "L' Invierno e Altre Storie" ("Winter and Other Stories") has pianist Matera leading the way over an electrically-intense, smoother groove. It is a very Pat Metheny-like track. "Impromptu #1"—the first of three such pieces on the session—is an elec-tremeloed thought-provoker and is more modern art than a classic framed. "Escape for the Soul" is a dramatic, cinematic grand musical car chase that melts into a slow showcase for each member to offer thoughts before a slower and excellent Maurogiovanni bass solo segment that leads back into the frantic chase. Villani drives this getaway vehicle hard.

Villani, one of Italia's foremost and well-respected musicians and music educators, has another winner with Stanic Boulevard. He and his crew are all outstanding collaborators. Their melodic, harmonic and rhythmic give and take is excellent throughout the session. There's an intense sense of teamwork here. It's organic. It works exceptionally well in making the album highly entertaining and enjoyable.

"Tomorrow We'll See" has Matera sprinkling atonally over a Miles Davis, Bitches Brew (Columbia Records, 1970) undercurrent before a fragmented and quirky synth-delivered theme speaks spooky, Frank Zappa-esque wah-wahs. "Impromptu #2" is a up-tempo guitar-driven funkish-plucked palpitation. "The Lonely Axeman," a tribute to the late British guitarist, Allan Holdsworth, is stark and dark. More sad than upbeat, even when the tempo opens up, it incorporates inviting electronic as well as acoustic playing where diverse textures predominate. "Svandea" is a shimmering night-sky with Pignataro's fine guitar and Matera's keyboard dancing in the heavens before moving into a slower place with Maurogiovanni's bass moving contrapuntally against the piano. Villani's outstanding playing behind it all brings texture. "Impromptu #3" has piano presenting over a swirly ribbon of Esquivel-esque tremolos and electronics with Villani and bass supporting. "Khamsin," which references the Sahara's hot winds, is a gorgeous modal melody that picks up pace and rolls into an exotic and tempestuous rock vibe before returning to its more restrained beginnings. An intelligent and attractive finale to an intriguing album.

Stanic Boulevard may reference the famous Croatian soccer star, Mario Stanić or an old Barese neighborhood (more likely). In any case, Villani and his All-Star crew do indeed score big with this eponymously-named album.