By MARK CORROTO
February 9, 2009
Sign in to view read count 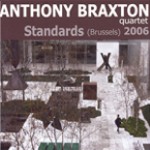 The jazz canon and Anthony Braxton have been companions throughout his entire career. His admiration for innovators like Thelonious Monk, Lennie Tristano, Warne Marsh, and Paul Desmond has been documented in interviews and music. Beginning with What's New In The Tradition (SteepleChase, 1974) to his "piano" recordings at New York's Knitting Factory in the '90s, Braxton has kept his listeners reminded of his jazz roots without imitating the style of other players.

Where jazz standards recorded by Braxton once expanded tradition, as with The Charlie Parker Project (HatART, 1993) or Eight (+3) Tristano Compositions 1989 (HatART, 1989), these discs are more like Braxton's Standards Quartet circa 2003 with Kevin O'Neil, Kevin Norton and Andy Eulau, heard on Leo Records. The outward bound turns inward. The quartet pays deference to the tradition in the way the music is presented. Much like later period John Coltrane recording his Ballads (Impulse!, 1962) and Johnny Hartman (Impulse!, 1963), these tracks communicate that the great innovator of our times is indeed at peace with standards, while he remains forging new pathways like his Ghost Trance Music.

The music chosen by the quartet is never repetitive (except for Wayne Shorter's "Virgo") and like any quality band, it gets better as the gig progresses. The band stretches out each track further and further as the days go on. By disc six they are in full swing, Braxton yielding plenty of space for his companions to play. These three are adept at improvisation, based upon coherent structure and inherent swing. Disciplined by the familiar and the revered, their departures or journeys tastefully reference the whole; certainly that is at Braxton's pleasure. Long beyond having anything to prove, his playing is as relaxed as can be.

No one is phoning their performance in here. They tear both Gershwin's "Strike Up The Band" and George Russell's "Ezz-Tethics" into frenetic pieces and the three group improvised pieces are outstanding.

The six discs are beautifully packaged in a box with thoughtful liner notes from Erika Dasgnino and Amirani Records chief Gianni Mimmo.

CD1: Forest Flower; It's You or No One; Darn That Dream; Improvisation n.1; Very Early; If I Should Lose You. CD2: Virgo (take 2); Embarcadero; Night Dreamer; It Never Entered My Mind; Fine and Dandy; Monk's Mood. CD3: Three Little Words; Wave; Ruby My Dear; Mean to Me; Afternoon in Paris; What's New.