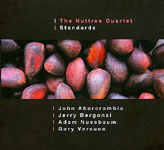 With the plethora of discs released every year that over-mine the standards repertoire, it's easy to forget that there was a time when an album called Standards would not be considered almost a dirty word. Saxophonist David Liebman's recently unearthed Pendulum Live at the Village Vanguard (Mosaic, 2008) is one such example. Drummer Adam Nussbaum, figurative leader of The Nuttree Quartet and occasional Liebman collaborator, may not demonstrate quite the same visceral energy on Standards, but there's still plenty of heat. This collection of ten well and lesser known covers, recorded over two wintery days at bassist Jay Anderson's studio with three good friends, makes a compelling case for their continuing appeal to musicians who may often be heard in more progressive contexts, but for whom this material still holds plenty of challenge and grist.

The members of The Nuttree Quartet have all worked with each other in different contexts—including organist Gary Versace and Nussbaum in guitarist John Abercrombie's organ trio when original keyboardist Dan Wall gave up the road a few years back—just not together as a quartet. Still, the shared chemistry that's evolved over the years is evident from the first notes of "Our Love is Here to Stay," a Gershwin tune treated with an appropriate mix of respect and irreverence, especially when a whole tone vamp takes it out with unexpected fire as Bergonzi and Abercrombie generate some linear heat over Nussbaum and Versace's powerful backbone.

Versace, as comfortable with John Scofield's soulful Music of Ray Charles tour as he is applying Western harmonies to guitarist Rez Abbasi's Indo-centric Bazaar (Zoho, 2006), is equally at home here, with an arrangement of Duke Ellington's "Come Sunday" that retains its familiar melody and base changes, but is so radically reharmonized as to sound as though it were written yesterday. His extended solo—equal parts direct lyricism and abstract impressionism—proves there's plenty of life left in a song that's well over six decades old.

Wayne Shorter's iconic "Footprints" receives a high velocity treatment here, with Nussbaum's two solos—one at the intro and later, after solos from his cohorts that culminate in a turn of breathtaking intensity from saxophonist Jerry Bergonzi—are a near-perfect combination of polyrhythmic and melodic invention. His kit is so beautifully tuned (and recorded, as is the entire quartet) that the changes and familiar bass line are always implied and, at times, clearly heard; a marvel that makes him more than a just a rhythmic anchor, but a melodic counterpoint throughout the session.

Abercrombie, the quartet's most visible member, has long relied on standards for a practice tool at home, and listening to Standards it's clear why. The best in forward-reaching music comes from knowledge of what's come before, and The Nuttree Quartet lives comfortably in both spaces, delivering a set of certain appeal to fans of the tradition while providing no shortage of meat for those more disposed to music with a modern edge.

Our Love is Here to Stay; Come Sunday; Footprints; Sometime Ago; Witchcraft; Israel; Eronel; All or Nothing at All; 12 Bars to Go; Naima.