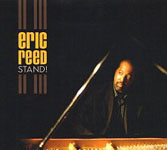 This eighteenth release by pianist Eric Reed is a spiritual melding of gospel and jazz idioms. Though not yet 40, Reed has accumulated considerable mileage. He was with Gerald Wilson at a mere 16, enjoyed a long association with Wynton Marsalis, and displayed a marked flair for the American Songbook.

This outing offers a rich outpouring of Reed as composer and orchestrator. The opening title track is a hard driving and muscular piece with an African-tinged reference that also recalls in effect, if not in melody, Duke Ellington's "Such Sweet Thunder." The dynamism of his chords are reminiscent of McCoy Tyner, who is sometimes cited as an influence. There's a complete change of pace with the pulsating samba "Adoracao" ("Adoration"), on which Willie Jones III really belts out the rhythm. "Pursuit of Peace" takes yet another different turn, with an easy, rippling bounce that recalls Ahmad Jamal, for whom Reed has also expressed great admiration. Rodney Whitaker's bass makes for especially tasty company on this tune.

A lyrical ballad, "You Are There," and the gently chord-based "A Love Divine" are just two of Reed's melodies here which cry out for words even as his bluesy and free-spirited melodies and performances are rich enough on their own. Perhaps it's Reed's long association with classic songs and gospel or the feelings his joyfully spiritual music stirs.

Stand!; Pursuit of Peace; Prayer; Git-Cha Shout On; Gratitude; You Are There; New Morning; Adoracao (Adoration); Like A Thief in the Night; A Love Divine; Everything That Has Breath.