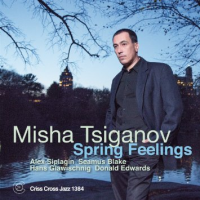 Those who appreciate and follow the art of arranging and orchestration in jazz often point to big band and large ensemble arrangements as examples of excellence, while the art of arranging jazz for the small ensemble is frequently overlooked. Horace Silver, Wayne Shorter, and Andrew Hill are a few who have achieved recognition for their intelligent small-group arrangements, and with his newest release, Spring Feelings, pianist Misha Tsiganov brings his talent to this under-appreciated art.

For his second release on the Criss Cross label, Tsiganov's choice of sidemen to interpret his music is reminiscent of his 2014 release, The Artistry of the Standard. Returning are trumpet virtuoso Alex Sipiagin, tenor veteran Seamus Blake, and rising star drummer Donald Edwards, all common collaborators in the Opus 5 group. Seasoned bassist Hans Glawischnig fills in for Boris Kozlov on bass. Whereas Tsiganov's first Criss Cross release featured only his imaginative reworkings of standards, mixes in five Tsiganov originals.

Throughout the hour long set, both the original material and the standards unmistakably bear Tsiganov's distinctive stamp. Tsiganov's melodies drift fluidly through constantly shifting meters and are punctuated by skipping, syncopated basslines that fit smartly with Tsiganov's colorful reharmonizations. The opening track, "You and the Night and The Music" exemplifies these characteristics and the band navigates Tsiganov's complex arrangement with ease. Donald Edwards in particular deserves a standing ovation for his graceful navigation of the band through the maze of ever-changing meters. "The Night Has a Thousand Eyes" takes a similar approach with the band alternating between straight-eighth 9/4 feel and a up-tempo swing.

Tsiganov also tips his hat to one of jazz's master small group composers, Wayne Shorter, with reworkings of two Shorter tunes. "Infant Eyes" keeps its slow ballad feel but is given a new time feel that switches between 7/4 and 4/4. "Yes or No" also moves through a variety of time signatures with an energetic and attention-grabbing undercurrent from the rhythm section, which leads into some of the best solos in the album. Sipiagin leads things off with fiery solo over the band's tight swing until they switch to a floating 7 feel for the beginning of Blake's melodically driven tenor solo. The band switches back to swing for Tsiganov's excellent solo which builds impressively in intensity to an exciting pyrotechnic conclusion.

For Tsiganov's original tunes he focuses less on complex time signatures and more on memorable melodies. "Jumping Michael" maintains a 4/4 time signature but it's spacious, syncopated melody gives it a distinctively Latin feel. "Jed's Place" is taken at a medium swing and follows a fairly traditional form, allowing the soloists and interplay of the group to really shine. Blake's tenor solo on this tune is particularly memorable as he thoroughly explores and expands upon his melodic ideas. The title track closes out the album on a bright note with an "A" section that is composed entirely of major and suspended chords. Tsiganov's triumphant piano solo on this track serves as a fitting finale to the album.

With "Spring Feelings," Tsiganov explores a new approach to quintet orchestration and in the process, provides a challenging canvas for the musicians to navigate. They succeed admirably and create really remarkable music. The strength of the music is especially remarkable considering the short amount of time the band spent rehearsing (three hours) and in the studio (seven hours). From conception to execution, this music succeeds on all fronts.