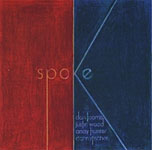 In his liner notes to Spoke's self-titled debut disc, Matthew Lima wrote that this Brooklyn-based quartet is "constantly refining the art of the compromise... not into a concession or lowering of standards, but an intermediate between different things." He's half right: There are no concessions whatsoever on Spoke; however, the differences are what it's all about.

The thought that went into the set's twelve pieces is literally mind-bending. Classical music isn't just one of the musical sub-cultures Spoke visits on this long strange trip. There's a symphonic quality to the construction of almost every piece: Middle sections aren't just slight deviations from the initial melody—they're freestanding, differentiated chapters in a series of detailed stories that are anything but traditional.

Dan Loomis' bass leaps out of the gate on "Pisces," accompanied by the steely drums of Danny Fischer. Randy Hunter's yawning trombone picks up Loomis' opening figure, and then Justin Wood's tight alto sax introduces the melody. Without pause, the two disparate instruments merge into a harmony not readily available on the open market. As a second groove is found, Wood unleashes a spark-spewing solo that showcases the alto's best qualities. Hunter eventually answers with a single note that twirls up and out of sight, and then launches into a muscular solo of his own while Fischer infuses timbales into the proceedings.

"Pisces" is the second-most uncomplicated track on Spoke. The other is a cover of the Chinese pop hit "Wo Yao de XingFu," and the group's tender approach to this piece says "love song" in any language. Everything else is songs within songs, each telling its own detailed story. "On Returns" puts all four players on separate islands, free-styling away, and then the islands merge into a musical peninsula that evokes images of bullfighters and picadors. "Blabber Battle" and "Ballad of Slow Onset Man" blends blues and Bartok in two multi-movement concertos; the latter tune is so labyrinthine, its actual climax only sounds like another pause, making the surging "HAF" seem like just another change in direction.

The only problem with The Wee Trio's Capitol Diner, Vol. 1 (Bionic, 2008) was that Loomis' foundation work kept getting lost in the shuffle. Happily, his oak-tree-thick bass is ever-present throughout Spoke, be it in solo or support: His resonant bowing on "Deed by Delusion" accentuates the piece's classical tone, as does Wood's piping flute. Fischer takes advantage of Loomis' steely floor to act as foil, fourth soloist, and "change agent" as he helps Loomis facilitate every shift in direction. Hunter coaxes multiple instruments out of his trombone—the purity of a trumpet on "Blabber Battle," the intrinsic longing of a French horn on "Wo Yao," and even the blatt of a tuba on "Ballad." But that's all gravy next to Hunter's overall solo construction, which should win prizes for architecture.

Frankly, Spoke is the antithesis of compromise, because its standards and targets are set far higher than the norm. After all, choosing to settle is not much of a choice.