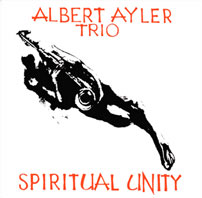 Whole generations of musicians and listeners experienced a dramatic and irrevocable awakening in the years after Albert Ayler's Spiritual Unity came out in 1964, and the record has a certain timeless quality that makes it just as important today. The piercing emotional emphasis and startlingly voice- like qualities of Ayler's saxophone playing turn childishly simple melodies into expanded voyages of personal discovery and spontaneous invention. Bassist Gary Peacock and drummer Sunny Murray share an abstract, ethereal connection where norms of meter and harmony seem quite naturally irrelevant.

But Spiritual Unity remains enigmatic even now, nearly 35 years after Ayler's body was mysteriously found in the Hudson River. Part of that mystique comes from Ayler's own shrouded references to religion and spirituality, with revolving titles like "Ghosts" and "Spirits" evoking milennia- old cycles of meditation, discovery, redemption, and rebirth.

Part of it also comes from the makeshift presentation the record received as the ï¬rst ofï¬cial release on Bernard Stollman's brand new ESP-Disk, a haven where "the artists alone decide" what would happen during their quick, mostly one-take studio sessions, but where the information provided about these events was spotty and sometimes contradictory.

This latest reissue of Spiritual Unity transports me to an existence ecstatically free of time and place, bringing back memories of how I ï¬rst got swept away in the Ayler phenomenon years ago. Oddly enough, I never noticed the first track was recorded in mono until today—which is a sign that the disc's sound quality, while less than spectacular, does nothing to interfere with its effectiveness.

The sound is better on this remastered version than the one I picked up a few years ago, but the liner notes fall short. The essays on the ESP-Disk phenomenon and the session itself don't have the same information content as the biographies, label story, and Stollman interview included with the earlier release. So there's really no need for those already familiar with this recording to dash out for the latest and greatest.

But if you haven't heard this record, you've missed out on one of the most profound artistic statements of the 20th Century. Enough said.