By Hrayr Attarian
September 6, 2007
Sign in to view read count 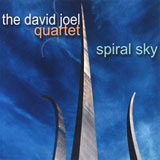 Each piece is like a well-crafted short story, with the ability to invoke a whole gamut of thoughts and emotions. The compositions, all by the Joel, are unique yet complementary to each other. In a time when most of what passes as fusion comes dangerously close to instrumental pop and elevator music, Joel's compositions are rich with substance without sacrificing form, and are extremely well-shaped. The richly mellifluous tracks are embellished by soaring improvised lines that go far away from the basic theme without losing sight of the melody.

The four musicians demonstrate a close rapport, forming a cohesive unit during the ensemble work, and unique individualities when soloing. The music is what one expects from a jazz-rock fusion recording, with a guitar and keyboard frontline supported by bass and drums, electric sounds and virtuoso solos. There are elements of gospel, funk and world music judiciously sprinkled in to spice things up a bit, with some references to the Mahavishnu Orchestra.

The highlights of this extremely enjoyable and rewarding listen are the complementary tracks "Eastern Truth and "Western Lies.

For those who enjoy fusion, Joel and his quartet have recorded a near masterpiece of the genre which only barely falls short of rivaling classics including the Mahavishnu Orchestra's The Inner Mounting Flame (Columbia, 1972) and Weather Report's Heavy Weather (Columbia, 1977).

The Dance Of Life; Eastern Truth; Western Lies; As It May End; The Star-Spangled Gospel; Spiral Sky; Little Bear Prelude; Little Bear; Other Side Of The Sun.