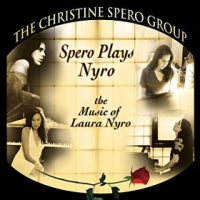 Pianist and singer Christine Spero and her group perform the music of singer and songwriter Laura Nyro on Spero Plays Nyro, a stellar tribute to one of the most iconic composers of the 20th century best known for the way she cross-bred the jazz, R&B, Pop and blues genres. Spero and band reprise some of Nyro's most familiar compositions recorded by such groups as Blood, Sweat & Tears, The Fifth Dimension, Three Dog Night and even, Maynard Ferguson. Perhaps a project long in the making as Nyro's music, particularly Eli and the Thirteenth Confession (Sony Music, 1968), served as an inspiration which left a lasting impression on the young Spero.

That definitive Nyro album was so influential that Spero chose to include the soft balladic "Emmie" and the pop-styled "Sweet Blindness"—two Nyro originals from that recording—provided here with modern arrangements that feature brother Elliot on a splendid tenor saxophone moment. First recorded by Peter, Paul and Mary and made popular by the Rock/fusion band Blood, Sweat & Tears, Spero voices a fusion-like rendition of the classic "And When I Die," showcasing the electric guitar of Scott Petito, a little percussion from Elliot and strong steady beats from drummer Peter O' Brien. One of Nyro's most important social songs of her era was "Broken Rainbow," penned for the unjust relocation of the Navajo Indians and beautifully delivered here by the singer.

The songstress and band are at their best on the lively upbeat and hard-driving "Money," where Spero reaches, the saxophone howls and supporting cast makes this one a highlight of the disc. Recorded by Three Dog Night and jazz icon Maynard Ferguson, the classic "Eli's Comin'" takes a new twist here as the arrangement drives the melody in a slightly new direction that works well here taking nothing away from its original texture. The Saxophonist has some of his best solo moments on the warm and delicate "Billy's Blues" as sister Christine delivers the lyrics as humbly as Nyro must have.

The harmonious and powerful "Laura and John," is actually a Spero original penned in homage to both Nyro and John Coltrane, lays down an emotional musical message. "Upstairs by a Chinese Lamp" is the albums most ambitious track at over seven-minutes long, reveals a light almost down-tempo structure featuring the high-pitched vocals of the singer with Elliot featured on both the soprano saxophone and flute.

The Fifth Dimension Pop group recorded several of Nyro's tunes including the 1969 "Wedding Bell Blues" and the 1968 hit "Stone Soul Picnic," provided here in stylish fashion on clearly, one of the best renditions of the song ever made. When one thinks the song is over, it seems to continue (as a separate track) but this time, closing on a furious Latin-styled romp. Armed with loads of talent, Christine Spero and her group do more than justice to Laura Nyro's music, on Spero Plays Nyro, each song is reimagined with creative arrangements making this album an enchanting musical tribute.