By Jim Worsley
September 27, 2019
Sign in to view read count 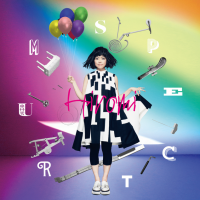 In an interview in 2019, legendary double bassist Ron Carter discussed his solo record All Alone (EmArcy, 1988). He stated that, "I wanted each track to have its own story. It wouldn't sound like the last tune or the next tune." If Hiromi had this mindset going into Spectrum, then in baseball terminology, she hit a home run. Perhaps, more like a grand slam.

She wastes no time in this carefully structured solo endeavor, diving into and broadly stroking her way through "Kaleidoscope." The song is an artistical definition of the word, viewed through a multi-colored lens that belies the black and white ocular of a piano. It sets a riveting pace and an exquisitely high bar. Seemingly nothing but a ballad could follow such a high-speed chase. Indeed, "Whiteout" quietly acknowledges the softer and graceful side of Hiromi's repertoire. Mind blowing, yet gentle piano runs with a million perfectly placed snowflakes (notes) embody this original born on a blanket of fresh fallen snow. "Yellow Wurlitzer Blues" dots another corner of the canvas as she transforms into a boogie-woogie pianist right before your ears, while somehow maintaining her own vibrant signature identity.

The title track, "Spectrum," is likely to be considered the consummate and most significant piece on the record. There aren't enough superlatives to do this work of art justice. Already a beautiful melody, Paul McCartney's "Blackbird" is reimagined with a keen interlude that stretches to the top of the limb, without ever losing sight of that "blackbird singing in the dead of night." Ragtime? Sure, why not? Hiromi pays tribute to the silent screen in this colorfully painted homage to Charlie Chaplin. The imagery of fast paced flickers is plentiful in "Mr. C. C." (named as a tip of the kasa to John Coltrane's "Mr. P.C."). It wouldn't be a Hiromi record if she didn't let her hair down at some point and just have some fun. She takes us along for the ride in this frenzied, chaotic, memory filled adventure.

Needing to catch our breath again, she meanders provocatively, yet soothingly, throug "Once in a Blue Moon." The piece gathers steam along the way, only to progress back down, in this reflective movement. George Gershwin's "Rhapsody in Blue" is then imaginatively ventured upon. Shortly into the twenty-two minute plus "Rhapsody in Various Shades of Blue," an unexpected chill of delight may go through you when it transcends into Coltrane's "Blue Train." After more expounding and exploration into the Gershwin tune, even if you are now expecting the unexpected, her slow, sweet, and genuine take on The Who's "Behind Blue Eyes" still comes as a surprise. Peter Townshend may never have envisioned this erudite rendition from the classic rock epic Who's Next (Decca, 1971). Hiromi creates her own kind of blue, coloring in and outside the lines of diversity. Seamlessly, the directive glides back to a Gershwin passage with a touch that seems to admire as much as probe and flourish to unforeseen and unforeheard heights. Lavish, yet personal, bold, yet touching, the masterpiece reveals more of itself with every listen. Closing warmly with the wistfully restrained "Sepia Effect," Hiromi takes us home from our date and tenderly kisses us goodnight.

Remarkable in its scope and vivid in its illustration, Specturm once again personifies the brilliantly gifted pianist's extraordinary skill set. Feeling and caressing every note empowers her to soar above the clouds and delicately shower her beauty upon us like heavenly drops of rain.