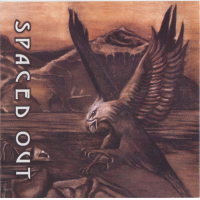 Spaced Out is a powerful prog-fusion band from Montreal. Formed in '98 by bassist Antoine Fafard, the group draws influences from Steve Vai, Allan Holdsworth and Bruford, but manage to craft their own unique sound in the end. This album could be the soundtrack to a sci-fi epic not yet written. One can imagine the transports flying overhead, robots in battle, and the ambient sounds of high-tech hallways.

As might be expected from a bassist-led band, Fafard's is often the dominant sound volume-wise. He seems deeply indebted to Stuart Hamm and Marcus Miller for much of his technique, like the percussive attacks on "Furax" and "Glassosphere". Fafard does, however, have the taste to let all the band members have their say. The most compelling voice is guitarist Mathieu Bouchard, whose lightning riffs and encyclopedic prog sensibilities enliven most of the set. The label's publicity materials hint that Bouchard might not be an official, permanent member of the group. More's the pity, as he provides a vitality that's missed on the couple of tracks without him.

Louis Cote fares pretty well up front on "A Freak Az" and "The Fifth Dimension". His lines are usually composed of longer notes with a deeper sense of foreboding. Eric St.-Jean's keyboards on those same tracks are equally ominous, his unison lines with Fafard weaving a quiet, magickal chant on "A Freak Az". Drummer Martin Maheux is the glue that holds this arcane collage together. He's perhaps shown to the best advantage on "Futurosphere", where there are no guitars to muddy the waters. "Green Teeth" is steeped in the funk of late-period Miles, while the tempo changes of "Delirium Tremens" stagger and stumble at odd intervals.

Much of the time, the disc is more intriguing for its textures than its melodies. Like many prog outings, the compositions serve best as frameworks for the players' creative impulses. The melodies are so angular and rapid, it's difficult to retain them in memory for long. The overall impact, the mood and air of the session, are what linger on, and the impact of Spaced Out is well worth the time and money spent to investigate.