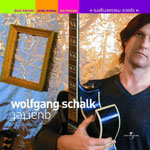 The music on guitarist Wolfgang Schalk's new release sounds as if it could have been recorded decades ago, and that's not a bad thing. Like older guitarists such as Jim Hall and Pat Martino and younger players such as Adam Rogers and Kurt Rosenwinkel, Schalk clearly deserves greater recognition for his own soulful articulation and deep skills.

Space Messengers follows 2002's Rainbows in the Night with (thankfully) the same band—including pianist Dave Kikoski, bassist Andy McKee, and drummer Ian Froman. Their communication has gotten stronger, resulting in tighter performances. The title piece speaks volumes with a melody that's filled with hints of melancholy and much feeling. They literally swing into action on "Gossip and Schalk's hollowbody fretboard shines on "The Bell Song, where he explores the possibilities with a simple theme that contains alternating tempos and complex phrasing added by Kikoski's classical touch.

The stirring slower compositions, such as "Anyways and "Peoples, are balanced by the spirited jazz infused blues of "Why Ypsilon and "Hi There, reminiscent of Wes Montgomery and Grant Green. But the music is in no way nostalgic and shows the jazz guitar art form can still be vibrant without the use of modern techniques or gadgetry. This is most evident on the closing tour de force "Frame Up," featuring Schalk on a nylon-string guitar where the quartet reaches the apex of creativity and energy.