Vidna Obmana: Soundtrack for the Aquarium 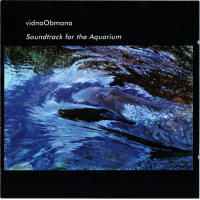 "Vidna Obmana" (whose real name is Dirk Serries) evokes the sunless wet gloom of his native Belgium in this two-CD set which, as its name says, is music composed by Obmana as background sound for an aquarium installation. The first disc has seven sections of his atmospheric (or rather, aquatic) ambience, dating from '92 and '93. The second disc is also a recording from 1993, using some of the same material – performed in Germany, according to the notes, at the (peculiar) hour of 6 AM.

Obmana stays with his familiar repertoire of long, floating electronic drone tones over percussion and sound effects. When he uses tonality, he favors somber open elevenths and fifths, intervals which could be considered his "signature." Other sections use microtones. The watery ambience is constantly reinforced by the sound of rainstick rattles, recorded water sounds, the occasional fish groan or human voice, and of course the obligatory vast reverberation. This is quintessentially European electronic music, harkening back to the ring modulator and oscillator work done by Belgian and Dutch composers back in the '50s and '60s – one could even call it, at this 21st century date, "traditional." It has an autumnal quality, like a long, rainy day in November. It moves slowly, like waves of clouds, filling the listening room with audible mist, peaceful but chilly and very soggy.