By NICK CATALANO
February 5, 2011
Sign in to view read count 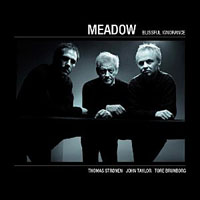 Perhaps because of the staggering snowfalls which have occurred in the northeast since winter started, my mind recently turned to Scandinavia. I was listening to some recordings that I brought back from Denmark on a visit last year, and wondering what those Nordic musicians were up to these days when some new music arrived in the mail from Norway.

Sadly, the jazz scene in this part of the world is quite intense, and virtually inaccessible to Americans. Clubs and festivals abound in Finland, Sweden, Estonia, Denmark, and Norway but the musicians rarely venture to our shores and their considerable recorded output is all but nonexistent here. American publications and writers have paid little heed this part of the jazz world but even perfunctory visits to Nordic venues or listening to CDs (which are not easy to obtain) can pay large dividends.

The small group music often involves interchanges and collective improvisations which somehow become quickly recognizable after repeated listens. The restraint and understated character of the acoustic compositions provide a welcome respite from the electronic cacophony that pours out of some of the more southern European locations.

All of these comments are conspicuously predicable of a CD which was recorded in Oslo's Rainbow Studios and has been released on the English Edition labe—an important pipeline for Americans interested in this music. Meadow's Blissful Ignorance is a trio session with saxophonist Tore Brunborg, pianist John Taylor, and percussionist Thomas Strønen. Terms such as "pastoral" and "elegiac" have been employed by publicists to describe the music and those terms are helpful. Brunborg composed seven of the nine tunes on the release, which are played with compelling restraint and thematic stillness.

The instrumental interplay, punctuated by Stronen's liquid brushes, achieves a sound that begs the question: Why is this particular combination of instruments rarely heard? It is the absence of a bass which gives the interplay uniqueness and the compositions carefully take note of this absence.