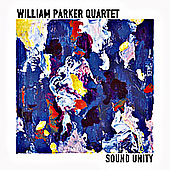 William Parker wears many hats: bassist, shaman, communicator, composer, poet, activist, bandleader, and more. (He's also been known to sport any number of colors and fabrics on his dome, but that's a story for another day.)

But the one thing he does best, and which has affected me most, is teach. In listening to his music, I've come to understand many things, some of which can't be easily put into words. They go way beyond any kind of technical or intellectual appreciation— more often than not, they have to do with unexpected ways that people, ideas, and emotions can be connected.

Something of a magnet for the out jazz community, Parker has worked with a number of players over the years, including some of the most abstract minds in music. But whatever the setting, he always introduces a feeling of groundedness and common sense. Those qualities came up in great abundance on O'Neal's Porch (Centering Music, 2000; AUM Fidelity, 2002), a soaring quartet record with alto saxophonist Rob Brown, trumpeter Lewis Barnes, and drummer Hamid Drake.

Sound Unity finds the same group reunited in live performance at two venues in Canada last summer (four tracks were recorded in Vancouver, two in Montreal). It sounds great. Given the instrumentation and the loose groove that underlies much of the performance, one can't help but recall the classic freebopping Ornette Coleman quartet. That resemblance comes through in the way the horns intertwine over the course of elaborating a theme, the way the rhythm section lays out a viscerally moving but constantly shifting foundation, and the way melody and harmony interchange roles fluidly over the course of what must be always, at least in a relative sense, collective improvisation.

But where Ornette fixated on folky blues, this group opens its horizons to a much broader range of sound and emotion. Rob Brown occasionally roots around the lower end of his instrument, but more often than not, he flies free like a bird into the air. Barnes stabs, flutters, and floats, capable of driving a point home but sometimes sounding quite fragile. And many glowing words have been said about the intuitive/counterintuitive relationship that William Parker shares with Hamid Drake, but they're as in tune with each other here as they have ever been, swinging (or not swinging), riffing (or not riffing), but almost always mining a groove from out of deep Africa.

Each tune in this generous (70-minute) set has its own dedication and story, elaborated in the liner notes along with a few other words from the composer. Each is sufficiently different that you'll run into plenty of surprises along the way. But once you've heard the record out, what's most striking is its overall connectedness. This isn't rocket science, or musicology, or anything the remotest bit academic. Just listen and you'll understand.