By Nic Jones
September 1, 2011
Sign in to view read count 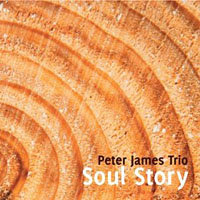 The piano trio is currently one of the staples in what might be called marketed jazz, but that doesn't mean that every example of the lineup lacks musical substance. British pianist Peter James' trio is a case in point, because it's clear that its stylistic range is wide, even while retaining its own identity.

Take the not misleadingly titled "Headlong," which finds the pianist damping the keys to vital rhythmic effect before bassist Jeremy Brown turns in a solo that, with shades of Arild Andersen, might be called reflective vitality.

"If the Hills Told Their Secrets" is, at first, mostly reflective, but the lyrical strain has such substance that the bland is happily kept at bay. Proceedings are colored by little touches of organ which, for all their modesty, have the effect of considerably enhancing the palette, a point which sums up what this trio is all about. In striking the somewhat precarious balance between reflection and rhythmic vitality so firmly, the trio marks out its own territory.

"Walk In The Park" works a down-home seam, albeit leavened by a measure of urbanity. Drummer Thomas Hooper lays a backbeat down, but James is a player sophisticated enough to avoid the obvious route. In journeying down the road less travelled, he offers insight into his ability to make a persuasive musical case without applying too much grease—although he implies, with his left hand in particular, that he could do so if he felt so inclined.

This is a trio that's more than the sum of its influences, although such is its range of expression that its clear the members are no musical purists. In bringing evidence of the music they actually listen to and appreciate into their work, they've put together a program as reflective of where jazz is right now as anything out there.