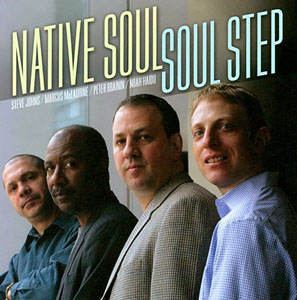 Keyboardist Noah Haidu is the collective's founder, and is the source of a good portion of the music's diversity. By switching between piano and Fender Rhodes—with a dash of B-3 organ and synthesizer—he adds just the right touch of funk and nostalgia to the set, making a credible effort at evoking several distinct styles of jazz.

The title track opens with a funky bass vamp, overlaid by some bell-like keyboard tones and Peter Brainin's soprano saxophone. Collectively they recreate a sound that could have easily come from a 1973 date on the CTI label, but that vibe immediately gives way to a more modern feel, as Brainen and Haidu switch to piano and tenor respectively, for "End of a Love Affair," employing some bold, modal chord blocking. Brainin's "Mingus" is a 3/4 vehicle for his grooved tenor improvisation, while Haidu employs a chopped waltz background comp, giving the track a smoky club feeling.

The funk reemerges in a big way when bassist Marcus McLaurine breaks open Jimi Hendrix's "Castles Made of Sand." The band really nails this one, using the original melody judiciously as an opening statement and as a framework for improvisation, restating the theme enough to be recognizable, but altering it sufficiently so as to avoid outright imitation.

In the collectively written liner notes, the band reminisces about the days when music was not a ubiquitous digital commodity, but something into which people had to put some thought. Getting one's paws on the latest releases wasn't always as simple as making a few keystrokes on a computer. Perhaps Native Soul longs for the opportunity to have its CD prominently featured in the new releases section at the front of the store. Soul Steps might have gotten some traction from music shoppers looking for a solid effort from a group of really fine musicians.

Track Listing: Soul Step; End of A Love Affair; Deep Blue; Inner Search; Mingus; Slipstream; Castles Made of Sand; Into the Night; Talking Drum; One For Op; Gift Within.