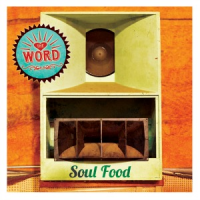 Right from the cover graphic depicting an audio speaker as a source of spiritual sustenance, The Word's Soul Food continues one of the most unusual but profoundly successful and satisfying collaborations in contemporary roots music. Bluesrockers the North Mississippi Allstars so deeply bonded with keyboardist John Medeski and pedal steel wunderkind Robert Randolph on their initial eponymous collaboration (Ropeadope, 2001), a followup was probably inevitable, but this album is far from merely de rigeur.

Quite the contrary, as the opener, "New Word Order" attains joyous heights the likes of which the quintet scaled on their debut, while, in a testament to their natural and willful chemistry, "Come By here" pulses with a tightly-locked unity befitting a much more permanent arrangement than the sporadic regroupings the group has enacted. "Play All Day" is further testament to the relish these musicians bring to this project, its title no doubt a wholly accurate self-reference and the performance as intense as those created by their respective individual affiliations.

Yet it's a tribute to their collective savvy The Word so skillfully exercise self-restraint, not to mention invention in composition, to also conjure up the dreamy atmosphere of the title track as well as its corollary, a steady building romp. Little wonder there's a warm, burnished clarity to the sound of these dozen tracks, recorded in Memphis' Royal Studios as well as Brooklyn (New York) Recording: it captures the nasty Delta edge of "Speaking in Tongues" as accurately as the contrast of Hammond organ and acoustic piano throughout.

A logical and mature extension of this album's predecessor, Soul Food rises and falls largely on Robert Randolph's ability to coax unorthodox sounds from his instrument . Pedal steel has rarely if ever sounded so otherworldly as it does on the aptly-named "Early in the Moanin' Time." He jousts as effectively with drummer Dickinson as his guitarist sibling on "Swamp Road" and, with more conventional tones, sprints right along with bassist Chris Chew during "Chocolate Cowboy."

Vocalist Ruthie Foster's turn on "When I See the Blood" is a direct nod to the sacred steel style from which Randolph evolved and to which Medeski became devoted some years ago, while "Glory Glory," is as traditional as gospel music gets, even with the electric piano played off against dobro. Andthe gusto with which Amy Helm takes the lead vocal on this concluding cut of Soul Food, makes the track sound like nothing so much as an ever so accurate description of its rousing nature as well as the dozen that precede it.

New Word Order; Come By Here; When I See The Blood; Play All Day; Soul Food I; Soul Food II; You Brought The Sunshine; Early In The Moanin' Time; Swamp Road; Chocolate Cowboy; The Highest; Speaking In Tongues; Glory Glory.