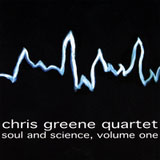 Known for its rich cultural heritage, the city of Chicago is also the home of great scientific and technological advances. Hormone treatment for prostate and breast cancer was developed by University of Chicago faculty, Dr. Charles Huggins, digital media was first conceptualized by a Chicago born technologist and the first nuclear chain reaction occurred underground in Chicago in 1942. To the unassuming mind, soul and science would seem to go together about as well as oil and water, but for the windy city's Chris Greene Quartet, soul and science is Chicago.

On the quartet's debut, Soul and Science, Volume One, saxophonist Greene, along with pianist Damian Espinosa, bassist Marc Piane and drummer Tyrone Blair manage to create a live performance feel, despite this being a studio recording. More impressive than any of the tracks' singularly is the audible camaraderie that Greene and his fellow musicians exhibit throughout. They play with a confidence that only years of experience and familiarity can bring, and ultimately this is where the significance of the disc's title becomes obvious. Considering this is a jazz band that has chosen to perform both popular and jazz music while arranging it all as a karyotype of jazz chromosomes, Greene has managed, through the process of recording and arranging, to turn the music itself into science.

The five-track disc features one original track—Greene's "4:23, in addition to Stevie Wonder's "Boogie On Reggae Woman, Tommy Turrentine's "Bonnie, Sting's "King of Pain and Duke Ellington's "Caravan. The way in which the "King of Pain has been revamped by the quartet could be described in scientific terms as genetic engineering. It's the disc's stand-out track, where the vocal element and pop/rock grooves from the original version are cut out and replaced with new elements—a masculine bass groove, provocative soprano sax lines, and steady and present piano and drum anchors. The song becomes something new: a viable jazz tune.

Greene and his quartet test the theory of evolution in "Boogie On Reggae Woman, as the funk and soul from Wonder's version are expounded upon in Greene's capable hands with the addition of Latin and straight-ahead jazz components.

As a bandleader, Greene should feel proud of his choice of music and the stellar musicians he selected. While Soul and Science is a solid recording from start to finish, one minor criticism is that "4:23 could have ended at the 6:08 mark. How Greene comes in at this point, after Espinosa's gorgeous piano solo, would be the perfect way to end the piece. The melody repeats through to the song's end, but never tops Espinosa's contribution. Other than that, Greene has shown that pop, rock and R&B tunes can all exist on a jazz record because, stripped to their very core, they are all music. What a great discovery.