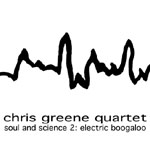 Jazz—a genre that has come to mean something different depending on who is asked and the period that is being discussed. Soul and Science 2: Electric Boogaloo, finds the Chris Greene Quartet conceptualizing jazz in a way that is bigger than the mainstream limits imposed upon it. On this follow-up to Soul & Science - Volume One (Self Published, 2007), bandleader and saxophonist Chris Greene is back with his quartet and they are ready to pick up where they left off.

Pushing the musical envelope, several different genres are represented on the album's track list, written by a diverse group of musicians including country music icon Hank Williams, jazz bassist Dave Holland, R&B legend Stevie Wonder and Greene himself. While Greene's original songs demonstrate a contemporary jazz sound, the cover material is made over to highlight the quartet's jazz acumen while also capturing the original spirit of the songs.

On Williams' "You Win Again," a song about a man that loves a woman despite her seeming cold-heartedness and proclivity for indiscretions, Greene puts himself in the composer's shoes (as though he'd done so before) and transforms the song into a blues turned Holy Ghost inducing tune—fit for any Sunday morning church service. The percussive element that opened Holland's own take of "The Oracle" on Extensions (ECM, 1990) is removed by Greene, while the group revisits Wonder's "Boogie On Reggae Woman" that they also covered on Soul & Science - Volume One. "Boogie 2.0" features a lot more of Greene on saxophone, is higher energy and has a grander funk component than as performed on Volume One but, unlike Volume One, it's Greene's original work, not the remake, that stand out most on Soul and Science 2.

Yourself." A mid-tempo tune with a singsongy melody, "Adamantium (part III)," plays on in the mind long after it's over. "Take Care of Yourself" is a sweet and melodic ballad that almost suggests how Frankie Beverly and Maze's break-up R&B anthem, "Before I Let Go," would sound without lyrics. Both songs convey a richness and maturity of sound and style that rivals some of what is played on contemporary jazz music stations across the United States. Soul and Science 2: Electric Boogaloo is certainly a formidable follow-up from a formidable band.