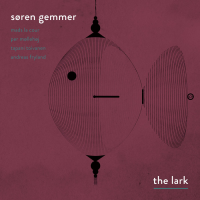 Danish pianist Soren Gemmer returns with an augmented line up for this his second album and follow up to the aptly named At First from 2013. Key addition is trumpet and flugelhorn player Mads la Cour's Almugi, who appears on 4 compositions and two of the group improvisations, and is particularly effective on the title track "The Lark" where he adds a simply beautiful, luminous, solo. It's a wonderful track that builds gradually, Gemmer's piano solo in particular setting things up admirably, allowing La Cour to release the tension just before the three minute mark. It is no exaggeration to say that the piece and the solo stand comparison with the likes of the late Kenny Wheeler, and the only complaint is I'd have liked it to go on longer.

The strength of the title track reflects a common thread that runs through the collection—that of a band who feel like a group of musicians with the confidence and the trust in each other to know when to play and when to sit out and consider a response to their collaborator's contributions. So La Cour's solo gives the impression of having weighed the views of the others, making a few apposite points, then concluding the discussion. It is a difficult balance to strike—if the musicians are too keen to make their point they cancel each other out, yet too much mutual respect and it sounds unnatural, overly mannered, as if waiting for someone to lead. Here the band strike the balance perfectly and consequently the album is a contemplative, intense, collection of compositions that rewards attention paid to it.

The pieces are intended as a series of portraits of people who in Gemmer's words "have been part of my social reality in the last few years..." and are intended to be ..."a respectful nod, a show of gratitude and words of advice to a series of people dear to me...." The respectful nods and gratitude are doubtless in the pieces such as the piano led meditation "Hilma Af Klint," presumably named after the Swedish painter, and still another "Poulenc" that takes its name from the French composer and pianist. The first of these is a highlight of this strong collection—the restrained shuffle giving way to a melancholic, descending, melodic motif, echoed effectively and affectingly by Gemmer's piano and Per Møllehøj's guitar. While there is undeniably a certain romance to the piece, the gorgeous swoon of "Writers Bloch (for Carl Bloch)" takes the ardour to a whole new level. The juxtaposition of the title and the music is intriguing too given that the latter conjures ambling arm in arm past waterside cafes, absorbed in the moment, rather than the more familiar religious themes of Bloch's painting. Either there is more to Bloch or this is a reference to spiritual love, but whatever the meaning it's a wonderful way to end the collection.

Perhaps the near death march theme of "Journalism" would also qualify as 'words of advice,' and goodness knows there are plenty that need it, while the intense, indefinable, dark mystery of "The Muse" would probably be a 'show of gratitude.' Mention must also be made of the 5 brief improvisations that divide the 8 main compositions and help energise the music cleansing the musical palette for the more substantial courses to come. Ranging between 30 seconds and 3 minutes long my favourite is probably the last "Improvisation IV" that tees up the final track so well it could have been part of the main composition.

This is a well-balanced album that makes for a satisfying listen. The mood can be brooding and intense, yet still open enough to shift and to allow some romance into the mix. The title track is perhaps the most accessible point of entry into this world, and there is a great, evocative, promotional video available. Gemmer has assembled a band that is both technically excellent and where the musicians also appear to enjoy playing together. This, alongside the high quality of the recording, contributes to the sense of space and dynamics in the music and makes for a highly enjoyable piece of modern jazz. Highly recommended.