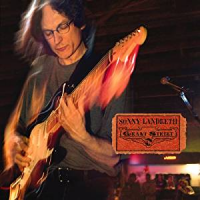 "A [man] had commenced plunking a guitar beside me while I slept...as he played, he pressed a knife on the strings of the guitar in a manner popularized by Hawaiian guitarists who used steel bars. The effect was unforgettable. His song, too, struck me instantly... "Goin' where the Southern cross' the Dog..." ~W.C. Handy, early 20th Century, Tutwiler Train Station, Tutwiler, Mississippi.

"[He is] probably the most underestimated musician on the planet and also is probably one of the most advanced." ~Eric Clapton, early 21st Century, somewhere in Cyberspace.

Could it be that these two observations, separated by a century, are talking about the same thing? Sliding a knife across guitar strings on a dusty railroad stoop and a man considered one of the most advanced at doing nominally the same.

...where the Southern Cross' the Dog...is where the old Southern Railroad crossed the Yazoo River in the heart of the Mississippi Delta. About an hour to the interior from there is the city of Canton. Canton was the home of Elmore James, the blues artist who electrified Robert Johnson's "Dust My Broom" and with Muddy Waters changed the rural face of the blues into a gritty urban juggernaut. Canton, Mississippi is also the birthplace of Sonny Landreth. Who is Sonny Landreth? He is, who Eric Clapton claims, with his famous knack for British understatement, "probably the most underestimated musician on the planet and also is probably one of the most advanced."

In his 30-year career, Landreth has played a significant part in Clifton Chenier's Red Hot Zydeco Band, Beausoleil, John Hiatt's band and as a studio musician. Additionally, he has managed a solo career that spans 20 years and six albums, produced songs covered by John Mayall, Jimmy Buffett, and the Neville Brothers, while pioneering the greatest advance in slide guitar playing since Duane Allman and "The Statesboro Blues." His technique, tantamount to the "tapping" method promoted by Eddie Van Halen in the 1980's, is significant.

Generally, guitarists will either depress strings to the fret or slide a tone bar over the stings to achieve a note. Landreth developed a way to do both simultaneously. He depresses the glass slide fixed to his left little finger against the strings hard enough that the pitch changes as he slides, but not so hard that the strings hit the frets (this is typical of all slide guitar playing). He then uses the other three available fingers on his left hand to press certain strings down to the fret so that they detach from the slide, producing different notes simultaneously with the slide notes. With his right hand, Landreth employs a modified Chet Atkins-style finger technique that allows him, in effect, to play with all his fingers. This is what enables him to execute the breathtaking 64ths he uses to pepper his solos.

Thus, the significance of Sonny Landreth is that he is the best slide guitarist playing and he has just released a live recording, Grant Street titled for the Lafayette, Louisiana haunt he has often played. Using his traditional trio (bassist David Ransom and drummer Kenneth Blevins, who with Landreth, make up John Hiatt's band, The Goners) Landreth spins out boiling versions of 11 original compositions, eight from previous recordings and three ("Port of Calling," "Wind in Denver," and "Pedal to the Metal") not previously released. Landreth provides high-octane performances of his oft-covered "USS Zydecoldsmobile" and "Congo Square," which very adequately point from where Landreth has come.

But it is his new pieces that show the way to where Landreth is going. "Port of Calling" begins with a rippling opening slide figure that deftly employs minor key modulations giving the song a slightly spooky voodoo ambience. His solo is ethereal, employing neo-Wes Montgomery octaves. "Wind in Denver" is an off-time Sherman Tank of a blues, only one of the two true 12-bar examples on the disc. Landreth doubtlessly sings of his experiences in Denver with the legendary wind there. His solo slashes like that cold wind, laying waste to the power trio format of Cream, Jimi Hendrix, and Stevie Ray Vaughan.

"Pedal to the Metal" is all one could hope for in a Sonny Landreth rave-up. It is fast and ferocious. This could easily be titled "Sonny's New Hawaiian Boogie" in tribute to Elmore James's same-titled song. Technically, Landreth is at the top of his game and throws flames for miles and miles. This is a fine introduction to the music of Sonny Landreth, but this is an artist whose complete corpus is necessary to the true understanding of where the slide guitar is going.

Visit Sonny Landreth on the web.