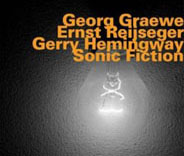 This long-standing and prolific international trio's debut finally gets the reissue treatment. Still quite active and stylistically amorphous, the group's first statement remains a bold one, establishing a collective aesthetic that defied boundary and categorization while making its place in history clear. The second part of "Alien Corn" is as fine a point of departure as any—drummer Gerry Hemingway ushering the track in with brushwork that stands quietly on pins and needles. His explosion into cymbals invokes a fairly standard trio interaction and yet the music thrives on quirky understatement, Ernst Reijseger's cello jumping registers without restraint but all at a medium dynamic.

Much of the disc thrives on space, on the glimmers of interstitial luminosity that would typify the trio's later output. Things do heat up a bit with "Sleeperwaltzer," which is just that, at least from Hemingway's point of view. It begins slowly enough, but a pause cracks the listener's perception of time in two just before the mayhem begins. Pianist George Graewe's proportional rhythms and constant tempo shifts keep everyone on tiptoes and Reijseger glides, swoops and sharp-shoots his way through the polyrhythms with Webern-ian ease and dexterity.

If "Fibulation" sports some of the European maximalism associated with early Spontaneous Music Ensemble, there's enough of the trio's character, in hindsight, to set the group apart from whatever references it might evoke. The playing is superb, the sound equally brilliant, but there might not be enough improvement in this reissue to justify a repurchase. That said, there is no better place to start exploring the group's output than at the beginning and those who take the plunge have worlds of discovery ahead.