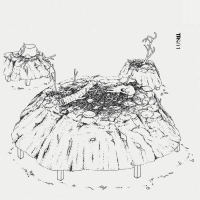 In one of the more appropriately titled releases, three French improvisers encounter two Americans in concert, captured during a short tour of France. Heading up the US contingent is underexposed AACM stalwart reedman Douglas Ewart, accompanied by another Windy City denizen in drummer Michael Zerang. Bassists Joëlle Léandre and Bernard Santacruz thicken the ensemble sound, while trumpeter Jean Luc Capozzo completes the unit. Ewart's instrumental choices and Zerang's percussive nous mean a world music feel pervades the five selections from what was likely a longer show, as suggested by the fade outs to some pieces.

Ewart operates at the extremes. Some of the best moments come when his almost oboe-like soprano saxophone and Jean Luc Capozzo's trumpet intermingle. That's especially so at the start of "Satellites" where the horns and strings interweave into a loose fanfare with Léandre's classically pure arco bass undertow. Once the drums join, matters become more fractured as Ewart uncoils soprano gobbets over roiling rhythm. However generally Zerang exercises considerable restraint and often drops out or concentrates on subtle textures, which aids the transparency and allows the twin bass interchange to be heard.

At the opposite pole, "Sculpteur d'ondes" showcases Ewart's didgeridoo, one of the tougher axes to use in an improvised setting. Rising to the challenge, he varies the essential drone with vocal exclamations through the instrument and rhythmic grunts. However some of the passages of indeterminate percussion and whistles are less compelling. In spite of the spluttering timbres which open "Philtre d'amour," Capozzo largely trades in melodic fragments. Santacruz and Léandre function as a pair, sometimes differentiated as one sticks to pizzicato while the other saws, but both are such free spirits that they switch restlessly.

"Planet Earth Folk Song" begins with more pleasing interaction between trumpet and Ewart's flute over what sounds like bowed stryrofoam squeaks, before the basses unite and Léandre adds a drifting vocal line in tandem with the American's multiphonics. The piece ends to enthusiastic applause from a clearly enraptured audience, perhaps reflecting that some of the episodes that work less well on disc were more than engaging in live performance.