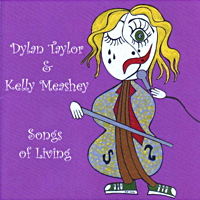 Vocalist-driven projects remain a minority venture in the ever-expanding CIMP catalog. The label has a reputation for providing emancipatory forums for free jazz and improvisation. Such sessions are its bread and butter, so to speak. In spite of the naysayers who deride its recording philosophy, CIMP’s track record for quality music is difficult to dispute. Still, there are probably many potential listeners who would regard the handful of vocal dates as blemishes in an otherwise exemplary inventory. Hopefully this disc—along with past endeavors for the label by the likes of Rosella Washington, Pucci Amanda Jones and T.J. Graham—will banish this sort of ill-informed prejudice.

As a Philly bull fiddle mainstay Dylan Taylor is a veteran of various groups including those of Khan Jamal, Bobby Zankel and Lee Konitz. In other words he’s got the clout to back up the bold stance as a solo instrumentalist. The session marks Kelly Meashey’s debut in a leadership role, but she’s not for wont of experience. As an educator at the Philadelphia University of the Arts, a musical therapist, and a soloist in a large gospel choir, her vitae is well stocked with impressive qualifications. Bass and voice may seem like problematic combination for a seventy-plus minute program of music, and there are lapses with the stripped down tandem. But the seat-of-the-pants flavor of many of the pieces adds, rather than subtracts, from success and sincerity of the date.


On the opening “Straighten Up and Fly Right” Meashey cooks up a scat-laced interpretation of the King Cole penned song while Taylor generates a winding elastic bass line in support. The ambitious “Valerie,” loaded with pathos and daredevil chance-taking, loses traction on Taylor’s sometimes stammering bowed arpeggiations and derivative lyrics. Still, Meashey’s frankly sung choruses can’t help but pull a little at the heart strings and the piece wins points for courage. Taylor’s “Losing You” holds together far better lyrically and Meashey’s sassy, self-deprecatory delivery adds even more to the memorable tune.


A piebald medley of “Simple Gifts” and “Ode to Joy” stands as on odd choice, but the pair attacks the Beethoven choral classic with equal improvisatory élan. Two bop standards “Blue Monk” and Clifford Brown’s “Joy Spring” serve as more jazz-centered parentheses. Both are recast through Taylor’s earthen arco play and turgid pizzicato plus Meashey’s swaying, fluidly voiced argot. His bow is even more stunningly put into service on the seven-plus minute reading of “Sometimes I Feel Like a Motherless Child,” where somber harmonics and hypnotic sliding tones blend with Meashey’s octave-leaping voice.

Jefferson Airplane’s “White Rabbit” offers another surprising hallucinatory interlude as Taylor’s stout double stops ratchet up tension and Meashey digs down to the dark core of the tune’s narcotic connotations. Ellington’s “Mood Indigo” and Eddie Harris’ hard grooving “Freedom Jazz Dance” serve as solid closers on the recital. Meashey and Taylor may have the deck of opinion stacked against them, at least as CIMP’s core audience are concerned. But those who listen closely to this disc will likely be converted by their collective charms.


CIMP on the web: http://www.cadencebuilding.com