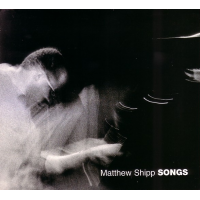 In a jazz world dominated by tradition, a few restless musicians stand out as pure idiosyncrasy. Pianist Matthew Shipp is one of these rare people. His inner logic, as restless and angular as it might be, makes it impossible to plop him in any category. Within his own small groups, he has laid down some sublimely gothic, dense statements as well as airy, floating delicacies. His efforts in David S. Ware's quartet have been remarkably emotive and grounded. But his recent electronic record Nu Bop simply trashed any expectations his listeners may have acquired based on these earlier recordings. And he continues to pursue threads that dangle far from the deeper traditions of energy music. On his new solo record, Songs, he takes on a set of nine standards that have been worked and reworked by improvising musicians since the dawn of jazz (and even before).

Despite the innocuous-sounding title and the remarkably mainstream tracklisting, don't go into this record looking for the familiar. Shipp pays due attention to the formal structure of these tunes, doting dutifully on refrains and harmony. But inevitably he allows his inner voice to lead the way "out." On Dizzy Gillespie's "Con Alma" he adopts a soulful air for a while, then jumps into hesitant, skipping counterpoint that contrasts flashy treble runs with dark, deliberate harmonic statements. He turns "Angel Eyes" into a restless cat-and-mouse game, full of sudden stops and starts. Shipp offers just enough of a hint at the original that his improvisations fall into context, and then somehow they frame it in a new light.

It's clear from Songs that Shipp is a coiled spring waiting to expand, keenly aware of the drama in his music. He pointedly avoids repetition unless it serves as a launching pad for fresh momentum. His wisps in the air, his giant gothic thrusts in the bass, and his meandering counterpoint all hint at ideas without explicitly stating them. So he involves the listener, which makes the experience that much more exciting. Shipp's music also leaves plenty of unanswered questions floating away, which lends his music the sort of mystery that can never be answered. Songs is deep, full of irony, and sublimely elevating. And not surprisingly, the record bears repeated listening. That's the way Matthew Shipp is most of the time.

Visit Splasc(h) Records and Matthew Shipp on the web.

We Free Kings; There Will Never Be Another You; Almighty Fortress Is Our God; Con Alma; Angel Eyes; On Green Dolphin Street; Bags' Groove; Yesterdays; East Broadway Run Down.