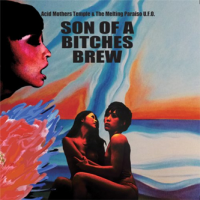 One would have to be living in a cave not to know that trumpeter Miles Davis' electric music has become a bit of a cause célèbre amongst forward-thinking jazz artists. Love it or hate it, Davis' radical experiments with funk, acid rock, and Markus Stockhausen-inspired sound painting has quickly gone from much-maligned to iconic over the past decade, with tribute recordings pouring in from all quarters. If parody is a valid form of tribute, Japan's avant-garde space-rock Acid Mothers Temple honors psychedelic-era Davis with tongue planted firmly in cheek.

Sporting what may be one of the best album titles of the year, Son Of A Bitches Brew seems to pull most of its inspiration not from its namesake, but from Davis' darker, more visceral material of the mid-1970s, as captured on records such as Agartha (Columbia, 1975), Pangaea (Columbia, 1975), and Dark Magus (Columbia, 1977). This should come as no surprise to those already familiar with the music of Acid Mothers Temple and its leader, Kawabata Makoto. The band has roots in Japan's heavy avant-garde neo-psychedelic scene, and Kawabata counts artists such as Yoshida Tatsuya (Derek & the Ruins Bailey, Satoko Fujii Quartet), and Seiichi Yamamoto (Boredoms) as regular collaborators.

The title track starts off as one of the album's more placid and jazzy pieces. Moving along at a moderate tempo, Kawabata's Rhodes piano and Tsuyama Atsushi's banshee soprano sax weave through a forest of beeping and buzzing analogue electronics, disembodied voices, chirping rhythm guitars, and Shimura Koki's Al Foster- inspired drums. The pace becomes urgent as the massed electronic sound-collage strives to take the foreground. Amidst the chaos, one a few quotes and cues from various Davis compositions of the early-to-mid 1970s can be discerned. The overall effect is not unlike some of keyboardist Sun Ra's most radical electronic music, or perhaps the most unhinged moments achieved by psychedelic rock groups such as Guru Guru and Gong—both of whom have collaborated with Kawabata. The final track, "Sweet Peanut vs. Macedonian Beauty," takes up where the title track leaves off, with effects-laden noise guitars, manic Rhodes piano, and a seething soundscape of deranged electronics wrestling amidst Koki's insistent, oddly placid, drumming.

Though the basic modus operandi remains more or less the same throughout the album, these tracks—all punningly titled—celebrate Davis' most extreme music in a free-improvisational fashion. One element that crops up frequently here is the late trumpeter's penchant for stopping the rhythm section during a solo, letting the soloist forge ahead unaccompanied. Kawabata uses this to great effect throughout, and the most frequent beneficiary is Atsushi, who does a fine job as the lone horn soloist. Though Kawabata is best known as a guitarist, here he spends equal time on Rhodes, soloing with complete abandon on both. Atsushi's fluid bass gives "Water Babies Kill Kill Kill" a somewhat more jazz-like flow, as things rapidly evolve into a tail- dragging, malevolent, funky jam.