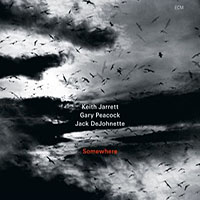 It's been four years since a recorded peep has been heard from pianist Keith Jarrett's Standards Trio, despite continuing to perform a few select dates each year. But even its last few ECM releases—2009's Yesterdays, 2007's My Foolish Heart and 2004's The Out-of-Towners—were all culled from a clearly fruitful 2001, making it well over a decade since a new recorded note has been heard from Jarrett's longest-lasting group. Fine albums all, the dearth of anything since that time has nevertheless begged the question, even amongst some of his most ardent fans, as to whether this undeniably fine trio had anything new to say.

From Jarrett's a cappella opening to Somewhere's wonderfully coalescing take of trumpeter Miles Davis' "Solar," all doubts are laid to rest as the pianist delivers a performance to rival his classic introduction to "My Funny Valentine" on Still Live (ECM, 1988), one of the Standards Trio's strongest records. It's a terrific start to an album that, recorded in Switzerland during the summer of 2009, celebrates 30 years since Jarrett, bassist Gary Peacock and drummer Jack DeJohnette first entered New York's Power Station studio for the fruitful sessions that yielded three recordings collected on Setting Standards: New York Sessions (ECM, 2008): Standards, Vol. 1 (1983), Changes (1984) and Standards, Vol. 2 (1985).

It's been a long time since the trio has stepped into a studio, and the easiest explanation is that this really is a group best heard live—a point driven home by this 65-minute, six-song set. In addition to Davis, the trio works its way through a list of equally classic songwriters. A particularly lovely take of Frank Perkins and Mitchell Parish's "Stars Fell on Alabama," finds Peacock, combining pure taste and tone, remaining at the top of his game. A quirky rendition of Harold Arlen and Ted Koehler "Between the Devil and the Deep Blue Sea" is largely constructed around this trio's remarkable ability to suggest swing without actually playing it—the entire structure ready to collapse at any moment like a house of cards—but never actually doing so—even as DeJohnette takes his only real solo of the set, while Jimmy van Heusen and Johnny Mercer's balladic "I Thought About You" closes the set on an irrepressibly romantic note predicated on the trio's egalitarian nature.

But it's Leonard Bernstein's two classics from the 1957 musical West Side Story that form Somewhere's centerpiece. A profoundly beautiful take on "Somewhere" leads to Jarrett's lengthy coda, "Everywhere," building this nearly 20-minute workout to a powerful climax, ultimately winding down to a gospel-tinged conclusion, while "Tonight" is taken at an unexpectedly bright clip. Peacock and DeJohnette swing more directly this time, with Jarrett's effortless motivic invention keeping secure his position in the upper echelon of improvising pianists.

Despite the 12-year gap since its last recorded work, Somewhere leaves no doubt that the special spark Jarrett, Peacock and DeJohnette first demonstrated on the bassist's Tales of Another (ECM, 1977) remains intact. If anything, Somewhere creates hope that another four years won't have to pass before this inimitable trio is heard from again.

Deep Space/Solar; Stars Fell on Alabama; Between the Devil and the Deep Blue Sea; Somewhere/Everywhere; Tonight; I Thought About You.