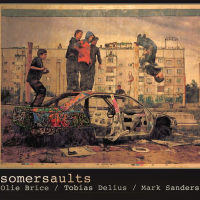 Hot on the heels of Immune to Clockwork (Multikulti Project, 2014) by his own quintet comes another fine album featuring bassist Olie Brice. He organised the December 2014 studio recording session for Somersaults which features a trio in which Brice is joined by drummer Mark Sanders, with whom he frequently plays (notably in the Riverloam Trio with Polish saxophonist Mikolaj Trzaska, arguably a dry run for this grouping). This trio is completed by long-time ICP Orchestra member Tobias Delius on tenor saxophone and clarinet. Although he was born in London, Delius is not a regular on the city's scene, having been abroad for most of his career, predominantly in Holland and Berlin, where he is now based. Nonetheless, he plays with London regulars Brice and Sanders as if they are a long-established threesome, partly a result of them having toured the UK and appeared at the Gronigen Festival together, in 2013.

The music consists of three pieces whose titles quote poems by Canadian poet Anne Carson. The first, "Travel all day on trains and bring a lot of books," runs for ten minutes and is a good introduction to the playing of the trio. Throughout it, Delius's tenor spins out a coherent line that is never predictable or conventional but does have its own internal logic and rightness, meaning listeners will be carried along by his playing without needing to question or analyse it. Together, Brice and Sanders lay down a solid foundation to underpin the saxophone and maintain momentum, at the same time doing so much more than that—augmenting, enhancing and commenting upon on it. Sometimes the line between jazz and improv can be a fine one, but this music stays on the jazz side. Without playing recognised "solos" or having one player consistently leading, at any moment any of the three can be in the spotlight, commanding attention. The shorter "Bones shake like sticks" shares its predecessor's merits, its seven minutes flashing by in as pleasurable a fashion.

In contrast is the album's tour de force, the thirty-two minute "Like a creature let loose in a room." Its duration means it is more episodic and varied than the shorter tracks and, hence, that it strays closer to improv territory—no bad thing. All three players demonstrate they are equally at home on that side of the line by taking equal responsibility for controlling the direction of the music. Doubtless as a result of their time spent touring together, they are all adept at rapidly reacting to the others' interventions, giving the music a pleasing natural flow despite its diversity. In concert or on disc, this is definitely a trio to watch out for, one with a bright future.

“Travel all day on trains and bring a lot of books”; “bones shake like sticks”; “like a creature let loose in a room”.