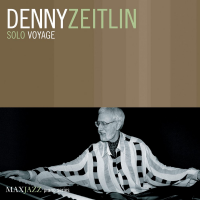 Most jazz artists must face the harsh reality that it's almost impossible to sustain a living by making music. Many find themselves having to take alternate employment in order to allow pursuance of their art, and then face the considerable challenge of doing so without impeding their continued development. So perhaps Denny Zeitlin has had it right all along. While managing to generate a world-class reputation as a pianist, he's also maintained a second life as a practicing psychiatrist.

Consequently, Zeitlin maintains a considerably sparer performance schedule, has a relatively small body of recorded work, and is less connected into the jazz community through sideman appearances. But his life choices clearly haven't impeded his ability to maintain the kind of artistic growth and reputation of better-known pianists like Herbie Hancock, Brad Mehldau, and Keith Jarrett. Solo Voyage is another fine example of just how fully-formed and well-conceived Zeitlin's music is, even though it isn't his sole profession.

His first solo recording since Live at Maybeck Recital Hall, Vol. 27 (Concord, 1992), Solo Voyage finds Zeitlin comfortably mixing well-known tunes like Dave Brubeck's "In Your Own Sweet Way, Wayne Shorter's less-recorded "Miyako, and Monk's "Bemsha Swing with his own compositions and a number of free improvisations.

While not many things link Zeitlin to Keith Jarrett, one common aspect they share is the ability to pull song-like constructs out of the ether. The freely improvised prelude and interludes that are scattered throughout the eight-part "Solo Voyage suite are remarkably well-formed. But while Jarrett seems to be more about extrapolating ideas in a kind of unbridled stream of consciousness, Zeitlin is more focused, using his improvisations to act as thematic introductions or almost summary codas to composed pieces.

Another feature distinguishing Zeitlin from Jarrett is his conception, which is equally advanced harmonically, but leans toward the tonal and round-edged, as opposed to Jarrett's predisposition to the jaggedly atonal and the lyrical. That doesn't mean that Zeitlin's music lacks emotional impact; the improvisation "Walking, Prancing, Marching, Dancing is filled with drama as he utilizes broad flourishes to build the tension.

Zeitlin embraces a complete view of the jazz tradition, with an evolved sense of stride propelling "Cascade and a more abstract impressionism characterizing the gentle "Quiet Now. He's also not averse to embracing technology, utilizing synthesizers to either create subtle orchestration, as he does on "Prelude, or to provide a sequenced backdrop for his imaginative reading of "In Your Own Sweet Way.

While neither overtly cathartic like Jarrett nor abstractly virtuotsic like Mehldau and Hancock, Zeitlin brings his own intrinsic compositional perspective and somewhat contained sense of adventure to Solo Voyage. He may not release records as frequently as some players, but when he does, each one is invariably a significant event, and Solo Voyage is an engaging journey from start to finish.

Visit Denny Zeitlin on the web.