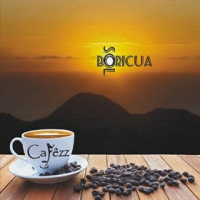 Coffee was introduced by the Spanish to the island of Puerto Rico in the mid 1700's, it's history coinciding with the hybridized Spanish/African musical entity which has come to define the island. The local jazz ensemble Cafêzz based their name and repertoire around coffee inspired themes—releasing "Music & Friends," in 2014— and on Sol Boricua they delve further into the islands multi-faceted musical heritage with diverse latte and espresso selections.

Carmen Noemí, the band's leader, pianist and composer, along with bassist and producer Edgardo Sierra, present an engaging sojourn into the Puerto Rican musical landscape, with a modern point of view. "Sol Boricua," is a salutation to the tropical sun, as the dualistic nature of bomba drumming intertwined with jibaro (mountain music) phrasing on the flute and cuatro, covers the entire tempo of their homeland.

Sierra pulls off a production coup on "Te Invito un Café," dubbing three bass parts, most dominant the piccolo bass, that has a guitar like clarity and brightness to properly portray this gentle samba. The sound of an espresso machine opens "Barista's Swing," a straight ahead number where Noemí takes the electric piano to meet Norberto Ortiz on tenor sax. She switches to accordion on "El Cafetal," though basically centered on the aguinaldo—Latin American Christmas music—it is transformed with a homegrown cadence and nuance. The classical inclinations and background of the musicians are brought to light on "Antes Que Salga La Luna," and "Desde Mi Balcón," the latter having a strong Peruvian waltz bearing. The Cuban guajira dominates "Cortadito," where Jose Jimenez takes over the sax duties, adding an excellent complement to the montuno piano arrangement. Continuing with international influences, "Mayi," is an oriental-fusion foray featuring guitarist Jorge Laboy, and spaced-out organ. They keep the groove going on "Just 4 Funk," where no further explanation is needed.

New age intonations serve as a backdrop for "Coffee Lovers," a sensual novella where the piano plays the dramatic female, the bass the confused male, seeking resolution to the eternal romantic dilemma. A requiem for a departed friend is offered on "Café no Céu," a coffee in heaven. Composed as a celebration of life, it is a full throttle Brazilian carnival parade. The danza originates from classical European ballroom dances and has strains of Cuban habaneras in its structure. Noemí is one of the islands premier danza piano interpreters, and ends the production with "Mujer de la Alborada," an homage to strong and influential women, wherever they are.

Cafêzz, being a talented and well-produced band, has cleverly created a unique concept swirling around coffee. They pride themselves on being Puerto Rican, and are recognized locally for their cultural contribution. They are an active ensemble performing at San Juan venues, and thus were able to continue the adventure started on the first record, this one sounding more mature and versatile. Goes to show, coffee and jazz do make an excellent combination.