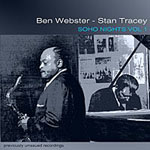 This month celebrates the 100th anniversary of the birth of one of jazz's titans: Ben Webster. His career spanned over 40 years, from being a journeyman in the Ellington orchestra to becoming one of that group's biggest stars and subsequently emerging as one of the most iconic figures of the tenor sax.

On the heels of 2008's Dig Ben, Storyville's mammoth, eight-disc box set chronicling Webster's European years, British label Resteamed is rolling out a series of previously unissued club dates that team the tenor legend with British pianist Stan Tracey. The first volume presents a high-quality recording of the set performed at the Ronnie Scott's famed London jazz club in January 1968, right smack in the middle of Webster's permanent European sojourn that lasted from 1965 until he died in Amsterdam in 1973.

Along with Dave Green (bass) and Tony Crombie (drums), the combination of Webster and Tracey results in a wonderful hour of music, especially where ballads (Webster's known specialty) are concerned. Anyone familiar with Webster's European recordings knows full well that his abilities hardly regressed with age. In fact he always remained the King of the Ballad and it's more than apparent on this disc with his work on "Londonderry Air" and "Come Sunday."

Tracey's accompaniment and soloing definitely measures up to the work of the leader. As the liner notes suggest, it's true that Webster tended to favor ballads and medium-tempo swingers over hot and heavy scorchers as one might have heard him play as a member of the Ellington squad. This might be true, for the most part, but the sax man definitely proves he still had his up-tempo chops in a relatively fast and furious version of "Sunday." This set does, however, present Webster at his swinging and easy-going best and is essential for Webster completists.

Johnny Come Lately; Come Sunday; Sunday; Londonberry Air; For All We Know; In a Mellotone; The Jeep is Jumpin'; What am I Here For?; The Theme.