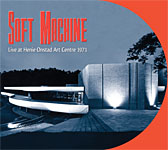 It's a curious thing, but live performances can be issued all the time in the jazz world without the suggestion that there are too many of them, while in the rock world the release of too many similar programs will be criticized as excessive. Pianist Keith Jarrett's last three releases with his longstanding Standards Trio—from The Out-of-Towners (ECM, 2004) through to Yesterdays (ECM, 2009)—have all been culled from a particularly fertile four month period in 2001, and each release is a welcome one, revealing a trio that continues to be creative and innovative, even with more than a quarter century under its belt.

It would be, to use one of Soft Machine's own titles, "Out-Bloody-Rageous" to consider Live at Henie Onstad Arts Centre 1971 a superfluous addition to this legendary and long-disbanded British group's gradually growing discography of archival live recordings, from the particularly inspired period between 1970 and 1972. The Cuneiform label has led the way in recent years, with Grides (2006)—featuring a CD from October 1970 and short DVD from March 1971—and Virtually (1998), with the full audio from another performance on the same day in March 1971 representing two of its best. Another company committed, in part, to high quality archival releases, MoonJune, has provided, with Drop (2008), a rare chance to hear Soft Machine in its transitional period following the departure of founding member/drummer Robert Wyatt. Culled from a fall 1971 performance with its remaining "classic" era members—keyboardist Mike Ratledge, saxophonist/electric pianist Elton Dean and bassist Hugh Hopper—Drop is, to date, the only commercially available live performance to document the tumultuously freewheeling but short-lived drummer, Phil Howard.

Live at Henie Onstad Arts Centre 1971 captures the group after Grides and before Virtually, but in a rare context where, performing in an acoustically well-tuned hall, the group was loud but not so much so that it became difficult to balance, as was often the case when it performed in larger, rock-oriented venues. Reel Recordings, a relatively nascent but increasingly active Toronto, Canada-based label that has been releasing rare archival performances with a unique attention to mastering, takes what was clearly a good set of source tapes and makes it sound even better. As fine a job as Cuneiform and MoonJune always do, this is perhaps the clearest and fullest live performance from Soft Machine's classic period, taking place eight months after the release of its groundbreaking Third (Sony, 1970) and a month before Fourth (Sony, 1971). The set list focuses heavily, as would be expected, on significantly altered material from these two albums, but there's also a material that would ultimately surface on Fifth (Sony, 1972) and Dean's eponymous 1971 CBS debut as a leader, later reissued by Cuneiform as Just Us (Sony, 1998).

In other words, not a whole lot different than Grides or Virtually—in fact, these two sets, spread across two CDs, are identical in running order to Virtually. Still, Soft Machine may have begun in the mid-1960s as a post-Dadaist psychedelic band, but by this time it was unequivocally a jazz quartet, albeit one equally interested in the modal tape looping experiments of minimalist forefather Terry Riley and the high decibel intensity of rock as it was the more sophisticated language of jazz. That alone might not be enough to recommend Live at Henie Onstad Arts Centre 1971, but the combination of Reel Recordings' marvelous production/mastering and the group's playing on a stage where everyone could hear each other better than was often the case—and, consequently, permitting a deeper level of interaction—makes this an essential and exciting addition to the Soft Machine canon.

Soft Machine's normal modus operandi was to perform two continuous sets, roughly 40 minutes in length. Wyatt was, by this time, becoming increasingly disenchanted with the direction the group was taking—moving farther away from any kind of pop sensibility and towards an uncanny confluence of complex writing and unfettered free play. That each member of the group was moving in a different direction—resulting in, after Wyatt's departure in August 1971, Dean's leaving nine months later followed by Hopper a year later—created a unique tension that, instead of being unfocused, made every direction the band pursued a unique whole that was greater than the sum of its parts. Whether it was the aggressively reckless abandon of Dean's saxophone and Ratledge's overdriven organ during their thrilling duet during the saxophonist's sketch-driven "Neo-Caliban Grides," or Wyatt's echo-laden drum solo during Dean's equally open- ended "Fletcher's Blemish," this was a group that, for its time, represented a potent alternative to Miles Davis' more rhythm-laden improvisational densities.

As capable as Ratledge was in approaching more liberated territory, he was also responsible for some of the group's most thematically memorable writing—as lyrical as this incarnation of Soft Machine ever got. While reduced in length from the side-long version on Third, "Slightly All the Time" shines a spotlight beyond Dean's visceral yet compositional soloing to Hopper's inimitable bass playing. Hopper passed away in June of 2009, and his playing here— focusing on Ratledge's form and imaginatively twisting the pulse while, at the same time, maintaining an unshakable anchor, even as Wyatt continues to throw caution to the wind and approach the groove with a perfect combination of rockish backbeat and jazz-centric experimentation—only reinforces just how much he'll be missed. On his own more oblique "Facelift," the densely overdriven fuzz-toned and occasionally wah wah'd bass works in concert with Ratledge's organ over its sinewy, elliptical theme.

Dean takes a lengthy solo that's an early album highlight on Hopper's "Virtually," a shorter but more powerful reading than the side-long version on "Fourth, while he takes an equally compelling turn on the more atmospheric second half of Ratledge's "Out-Bloody-Rageous," another Soft Machine classic that makes his passing at too young an age in 2006 equally tragic.

To make the album even more memorable, Reel Recordings' Mike King has included two extended articles. A fascinating transcription from BBC Radio producer David Epps' October 1970 broadcast with Soft Machine sheds light on recording techniques of the time, and the use of Electronic Music Studios' then-new VCS3 (Voltage Control Studio with 3 Filters) to process the sound of the group's instruments as the group gradually builds a sonically unique version of Ratledge's knotty "Eamonn Andews." Even more fascinating is an extensive eight-part essay on CD-ROM, "The Soft Machine Sound: An Acoustic Electronic Experience Examined," that traces the evolution of recording technology, the confluence of seemingly disparate musical approaches—from the extreme avant-garde to the catchy Brit-pop—that ultimately led to the anything but discordant or non-convergent sound of Soft Machine, and how the culture of the time allowed the group a degree of popularity that would likely be impossible to achieve today.

With Live at Henie Onstad Arts Centre 1971, Reel Recordings delivers perhaps the definitive live recording of the classic Soft Machine line-up. Rather than supplanting previously released recordings from the time, however, the album is a wonderful dovetail that, sitting as it does between Virtually and Grides, demonstrates a group at the height of its powers, evolving on a moment-by-moment basis.