By JOHN KELMAN
October 1, 2006
Sign in to view read count 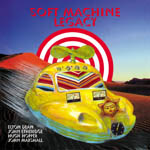 The problem with reunions is that they usually serve a fan base looking for classic repertoire and little in the way of new material and direction. Fortunately, in the 25 years or so since the legendary British jazz/rock group Soft Machine disbanded, two members of the classic lineup—saxophonist/pianist Elton Dean and electric bassist Hugh Hopper—have used the Softs brand on diverse projects including Soft Heap and Soft Bounds. In recent years they've teamed with others Softs alumni who never played together in the day.

The latest edition, Soft Machine Legacy, is certainly the strongest, and it has managed to avoid the pressure of focusing primarily on a decades-old repertoire. With a live DVD and CD already out, Soft Machine Legacy is the group's first studio recording. It also has the sad distinction of being Dean's last studio recording before he passed away in February of this year.

With more collaborative writing, in particular significant input from guitarist John Etheridge, the complexion of the group is inherently altered from '70s Softs lineups. There's a greater sense of joint movement, as opposed to the classic lineup with keyboardist Mike Ratledge and drummer Robert Wyatt—a stunningly innovative band that was inevitably short-lived due to directional disagreements between the members. Decades have passed and more catholic musical dispositions now prevail. Etheridge's "Kite Runner, which opens the disc, certainly rocks harder than anything that's come before.

That's not to say that the group completely avoids its origins. "Ratlift brings together familiar themes, including Ratledge's "Slightly All the Time and Hopper's "Facelift. Drummer John Marshall, who's equally capable of delicate subtlety and powerhouse aggression, is at his unfettered best here, moving seamlessly in and out of the groove that supports Hopper's 11/8 riff. Hopper kicks in his trademark fuzz bass while Etheridge plays with an abandon that rivals Marshall.

Often overlooked as the guitarist who replaced Allan Holdsworth, Etheridge may not have developed as distinctive a language, but he's a more unconsidered player—and in the best possible way. There's an edge to his playing that has been missing with Holdsworth for years, and it gives SML an energy that the Soft Works project with Holdsworth lacked.

Dean is also in exceptional form, combining powerful themes with intrepid free play on Hopper's "12/12. Playing more Rhodes here than he has in years, his improvised duet with Etheridge, "F&I, demonstrates both players' breadth. Hopper's ability to fix a groove is in plain view on "Fresh Brew, a collective improv that pays homage to trumpeter Miles Davis, but in an open, less dense fashion. It's also proof that the greater success which has eluded these artists in North America is nothing more than a matter of wrong place and, perhaps, wrong time.

The group is continuing with woodwind multi-instrumentalist Theo Travis, but Dean's last work is a strong and fitting final document, demonstrating that spirit, not a style, is truly Soft Machine's greatest legacy.