Autorickshaw: So The Journey Goes 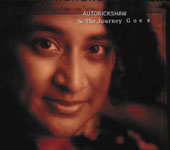 A winning argument could be made for Toronto as a multi-cultural city like no other, New York included. Through its veins flow the tradition of numerous nations, including India. Music is one of the traditions that hold sway, not only in ethnic exposition but also in collaborations where tradition and modernism blend.

Toronto band Autorickshaw has, for the past five years, been bringing to the fore a musical hybrid that draws from Indian classical music, jazz, folk and other world musical strains to come up with an enchanting and fascinating amalgam.

Autorickshaw continues the tradition with So The Journey Goes. Singer Suba Sankaran shows that she can get to the emotional depth in both Indian classical singing and jazz. Both are improvisatory, but the harmony is different and the ability to bridge the two is an accomplishment.

The title track starts as a jazz tune. Sankaran has the syncopated phrasing that captures the pulse of jazz. She pulls off a nice surprise when she goes into Indian classical singing. The arrangement is perfect for the tradition and so is Sankaran, who then leaps into vocalese in one clean swoop. The instrumentation revolves on an array of Indian percussion and the whooping bass of Rich Brown.

Sankaran is also adept at singing compositions based on both the linear and non-linear scales of a raga. "Vara Sapta Swara" encompasses major and minor tonalities. It is no mean accomplishment to evoke the mood, but Sankaran is deeply ingrained in the raga and she sings with a soft billow to capture the twin tonalities. The instrumental backing is lean with Ed Hanley (tablas) being the main, yet complementary, accompanist.

"Nalina Kanthi" is based on the nalinkantha raga. It was written by Trichy Sankaran, a leading exponent of Indian classical music and multi-instrumentalist who plays the mridangam, kanjira and solkattu here. This is another beautiful evocation and exposition, the non-linear path finding clusters of vocalizing with short intonations. The singer has to be aware of the concept and divine it with intuition, and Sanakran does that perfectly.

Autorickshaw keeps pushing the edges in its journey for something new and challenging. The group has found it both on record and in its many live performances. But the beat goes on for this band and it will be interesting to see what they come up with in the future.