Lucid: So Oder So 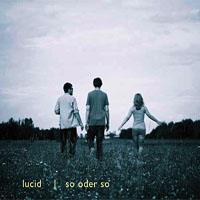 Lydia Schiller, Sevi Krieger and Florian Leuschner met not long ago as members of one of Germany's several superb youth jazz orchestras (yes, that is a good idea; a pity it hasn't surfaced on this side of the Atlantic) and decided to form a working trio built around Schiller's lucid vocal talents, which include flawless diction, unwavering pitch, and an uncommon ability to scat and swing. Since the first three tunes on So Oder So are sung in German, it would be helpful if the listener were conversant in that language, but even if that isn't so, Schiller's talent can nevertheless be appreciated for what it is: exceptional. Her English is remarkably polished, embodying only traces of her German heritage.

The music is, for the most part, tasteful and neatly arranged, primarily by Leuschner. An exception is Matt Dennis/Tom Adair's "Everything Happens to Me" whose nearly three-minute introductory passage in "vocalese" is inapt and unnecessary. Happily, that is the lone misstep in an otherwise well-designed program. As for the choice of material, neither George Gershwin's "Summertime" nor Mick Jagger/Keith Richards' "Satisfaction" can be numbered as personal favorites (others may reckon otherwise). Duke Ellington's "Love You Madly" isn't one of the Duke's masterworks, to address the matter charitably, and it is the only piece on which Schiller seems the least unsure of herself. Among the others, the standout to these ears is "To H." (music by Leuschner, lyrics by Schiller and Krieger), a poignant ballad sung in English about the personal nature of aging.

Even though Schiller is front and center on every number, Leuschner and Krieger do their part to make the trio shine. Krieger comps and solos with assurance, while Leuschner invests the lower register with warmth and power, whether on baritone sax, bass clarinet and contra-alto clarinet. The thing most difficult to comprehend when listening to Lucid is that its members are barely out of their teens; they play with adeptness and maturity far beyond that. With one splendid album already under their belts, the road ahead looks spacious and promising.

So Oder So; Sie Sieht Mich Nicht; Waldemar; Feel; Throw It Away; Everything Happens to Me; Summertime; Love You Madly; To H.; Satisfaction.