Paul Simon: So Beautiful or So What 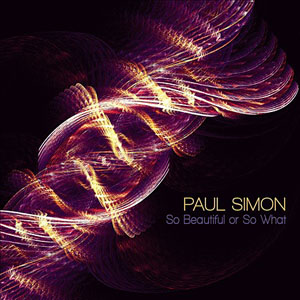 After breaking out with the iconic Simon and Garfunkel's rapid-fire string of hit records, Simon slowed his output as solo artist down, with only 10 studio albums since 1972's Paul Simon (Warner Bros.), including So Beautiful—but he's clearly focused on quality over quantity, with Songs from The Capeman (Warner Bros., 1997) his only truly weak recording. Simon's ability to build incrementally, one album, to the next, has been impressive, sometimes making quantum leaps like Graceland, other times consolidating the past on You're the One (Warner Bros., 2000). So Beautiful retains some of Surprise's 21st century sonics, but marries them with the larger cast of characters, instrumentation, and cross-cultural concerns of Graceland and Rhythm of the Saints.

Lyrically, Simon is as insightful as ever, turning a trip to the Pearly Gates into a bureaucratic experience on "The Afterlife":

Buddha and Moses
And all the noses
From narrow to flat
Had to stand in the line
Just to glimpse the divine
What'cha think about that?
Well, it seems like our fate
To suffer and wait
For the knowledge we seek
It's all His design...
You got to fill out a form first
And then you wait in the line.

Simon often takes time to get to his point, as he does on "Rewrite," where the protagonist finally (and poignantly) reveals the purpose of his historical revision, to replace:

Where the father has a breakdown
and he has to leave the family
But he really meant no harm.

A car chase
And a race across the rooftops
When the father saves his children
And he holds them in his arms.

Surprisingly, the production isn't slick or pop-like. Instead, it's as close to a roots record as Simon has made—strangely, despite its use of sampling, processing and other studio devices—with longtime guitarist Vincent Nguini's spare, Afro-centric lines driven by tremelo'd, strummed 12-string guitar and drummer/multi-instrumentalist Jim Oblon's drums on "The Afterlife." V.B. Madhusadanan's tabla and Karaikudi R. Mani's konnakol propel "Dazzling Blue," a gentle love song, while the title track combines complex polyrhythms, layers of guitars and bansuri flute to deliver its equally complex and ambiguous message.

Unlike many singers, who take a major hit when they age and drop in range, Simon may not be going for some of the high notes he used to, but his voice still sounds as sweet and strong as ever. So Beautiful or So What is another standout in a discography that may be relatively diminutive, but is clearly all the better for it.

Getting Ready for Christmas Day; The Afterlife; Dazzling Blue; Rewrite; Love and Hard Times; Love Is Eternal Light; Amulet; Questions for the Angels; Love & Blessings; So Beautiful or So What.

Title: So Beautiful or So What | Year Released: 2011 | Record Label: Hear Music